For today’s story, we’re traveling to the Cornish resort of Newquay to find out why the mankini’s been banned, along with other “inappropriate clothing.”

Yes, boys and girls, women and men, dogs and cats and everything in between, in Newquay enough people—and I have to guess they were of the male persuasion—wore mankinis  that they became worth banning.

A Guardian article reports that the ban was part of an attempt to cut down on anti-social behavior. It doesn’t comment on whether the mankini is, in itself, anti-social, but I think a good case could be made. 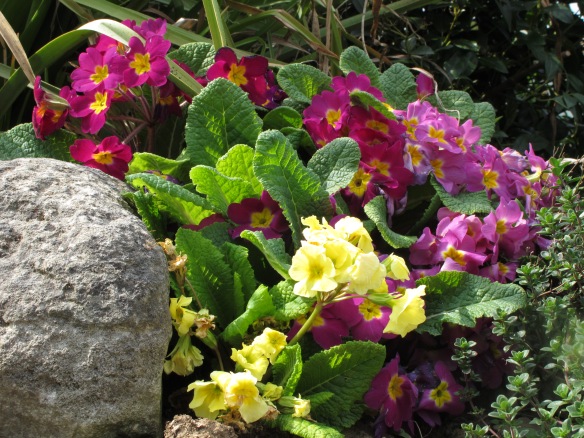 Semi-relevant photo. Primroses, taken in May (they’re past their best now). I thought the primrose path might actually have a connection. If you want a picture of the mankini, you’ll have to follow the link above, because, no, I just can’t do it. They’re too ugly.

And here I have to interrupt myself: Since English place names need a pronunciation guide if you’re going to have any hope of knowing how to hear them in your head, never mind say them out loud, I’d better tell you that the town’s pronounced NEW-key. I should follow up by saying that once upon a time, in a more innocent (and possibly more boring) past, it was the place Sunday schools went to hold their picnics. They drank lemonade and ate Victoria sponge cake. What else they did I’ll leave to your imagination, because the world of Sunday schools is so deeply foreign to me that I’m not even sure how to poke fun at it.

Inevitably, though, Sunday schools lost their hold on the culture. Time passed. More time passed. At some point Newquay became the place for stag and hen parties to get drunk and throw up in the street. What fun. Isn’t modern life glorious? We’ve done such wonderful things with our liberation. According to mayor Dave Sleeman, in the 2000s “you couldn’t walk the streets on a Saturday without seeing someone wearing a mankini or what have you.”

Eventually the teenagers joined in. Being new to the art of drinking, they got so drunk they fell off the cliffs. Which is not only serious but fatal, and it happened twice and suddenly people started saying out loud what surely some of them were already whispering: “I think we have a problem here.”

Not long after that, residents and business owners marched to “take back their town,” as they put it. Cops started meeting trains in the summer and shaking the kids down, looking for the booze they were still too young to buy so they had to bring it from home. I don’t know if that would have stood up to a legal challenge, but no one seems to have made one.

How well a ban on inappropriate clothing would hold up on appeal I don’t know. It’s a vague term. Your inappropriate may be my fashionable, or my comfortable, or my hysterically funny, or even my perfectly normal, although I have never and will never be seen in a mankini.  That’s a solemn promise, and folks around here will be relieved to hear it.

The definition of appropriate varies wildly with time and place. There was a time when the jeans I’m wearing would have been inappropriate enough to get me in serious trouble. I’m guessing an appeal would stand a fair chance. But launching one depends on someone being sober enough not to throw up in (or wear the mankini to) the lawyer’s office. So I’m not holding my breath.

I’m not going to defend the mankini. I may be dyslexic about fashion, but I do know ugly and ridiculous when I see them. In fact, that may be part of my problem with fashion, but let’s skip over that. I’m also not going to defend throwing up in the street, or the hen and stag party. The hen and stag groups I’ve seen wandering the towns and trains look dismal, and I’m always glad not to get invited to any because after a while I’d run out of contagious diseases that could keep me away at the last minute.

I also sympathize with the residents of Newquay who want something like a normal life. Living in the middle of someone else’s party isn’t a whole lot of fun—especially when it reaches the stage where people fall off cliffs. It’s the approach that makes me hesitate.

But something baffles me about the article. This is coastal Cornwall. People I know sit around saying, “I want to go someplace hot.” You can hear the italics in the way they say it. They want to lie in the sun and sweat. They want to be incapacitated by heat. Because it doesn’t get hot here very often. The summer here may give you a hot day or two, but basically they range from comfortably warmish to comfortably cool. If it gets up to 80, the newscasters talk about heat waves. Mostly we have the kind of weather where sleeves feel good. When I asked an acquaintance if she wasn’t freezing in a spaghetti-strap sumer dress, she said, “We just have to wear them anyway, otherwise we’d never get to.” Go to the beach and you’ll find windbreaks, cover-ups, sweatshirts. I’m writing this on June 1, and I’m wearing three light layers, and they feel good.

How, I ask you, are men running around in mankinis?

78 thoughts on “A Cornish beach town bans the mankini”