If search engine terms are any measure of what people want to know about Britain, I’m full of insight. And that other stuff, but it’s not what we’re talking about right now. I’m disguising myself as a sensible bloggist, so behave please. We’re in public.

I keep a list of the search engine terms that lead people to Notes, and that list tells me everything I need in order to fake my way through a serious topic. So here we go, with Google’s lower-case style and lack of question marks carefully preserved where I quote directly. Somehow adding quotation marks seems—oh, I don’t know, un-search-engine-like, so I’ve left them out, even though things would be clearer if I added them.

I had four searches about these: who swears more, us or uk (I don’t know, but I’m pretty sure it’ll depend on what you consider a swear word) and usa vs uk profanity. Both of these popped up twice, each worded the same way and in a short space of time, marking them as two repeat searches. What do we learn from this? That the people who are interested in swearing try repeat their searches and return to sites where they probably didn’t find an answer the first time. 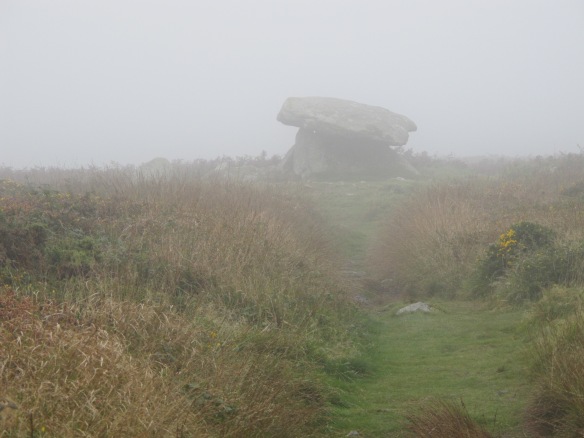 Irrelevant photo: Chun Quoit in the fog. This is an ancient monument near Penzance. No one knows what its purpose was, but it looks a lot like a giant stone ironing board.

On a vaguely related topic, I was on the receiving end of five searches about manners: british have nicer manners (than who?); manners and how they started (twice); american manners for brits (see next question); what about manners in the us (we don’t have any, so don’t worry about it). The idea of two polite Brits brushing up on American manners in advance of a trip is touching, in a sad sort of way. It’s thoughtful, it’s polite, and oh sweetheart, it is so not going to help.

The world—and I’m exaggerating only slightly; it’s called the multiplier effect and it allows me to lie in good conscience—is obsessed with lemon drizzle cake. I have no idea why. I mean, it’s good, but I never heard of it before I moved to Britain so how did everyone else? I had three searches for recipes in cup measurements (those would be from Americans), and one asking for metric, one that just asked for and measurements, possibly of the ingredients, possibly of the resulting cake, and possibly of the person who ate it all in one sitting. Plus one wanting an easy american english recipe—presumably that’s one with the excess U’s left out because they’re fattening. I did write a post or two about this, but in trying to come up with a recipe in cup measures I screwed the whole thing up so I’m not going to link back to it, even though it’s the most important topic I’ve written about. Other searches wanted to know about english food, british food, food about england in short note (I am notably short, but I don’t think that’s what this is about), tea, and an american expat making chocolate chip cookies in England (which is cheating a bit since it’s not exactly about Britain but let’s include it anyway because that’s me; I made a batch last week, since I’m the proud hoarder of a new stash of chocolate chips).

Tourism sites think we want to know about beaches, castles, and places to stay. Bullshit. Here’s what people want to know: do the british mind american tourists; american tourists hated; annoyed by tourists? Cornwall (the question mark, being in the middle, survived); why are british so mean to american tourists. So, with that level of paranoia, we can answer the next two questions: why so few american tourists (because they think no one likes them) and are americans in awe of Britain when they visit (they might be if they weren’t so busy worrying about whether anyone likes them and why they don’t). And three people wanted to know about emmits, which is a Cornish word for tourists, although not necessarily American ones. It’s not a compliment, so maybe those tourists and would-be tourists are onto something. And in a neat little irony, I just googled emmits notes from the uk to locate the link to the back post on emmits.

Three people want to know how to pronounce the Widemouth part of Widemouth Bay (Widmuth, to save you the search). No one wants to know how to pronounce anything else, although one asked about british place of interest or towns consonants missing. I don’t know what this obsession with Widemouth means. Maybe it’s the center of the universe, although you wouldn’t think so to drive through. Other searches are: talking in british english a sex (no, I don’t understand it either, but then I’m American so maybe I’m not supposed to); do the english have accents to the aussies (is a bear Catholic? does the Pope shit in the woods?); table british accent (this may have to do with food but it may have to do with parliamentary procedure, in which case it’s complicated because to table means different things in American and British usage); british accent are fascinating (yes, but not half as fascinating as Google searches); pure english word list (sorry, kid, but English isn’t a pure language). And finally, about the U.S., what do americans call cats (we call them cats, or sometimes kitty).

Lots of people want to know about lawyers and their wigs—their history, what lawyers think of them (they all, of course, feel the same way), whether they’re itchy, why lawyers wear silly wigs (no judgment there). Apparently if you know three things about Britain, one of them is that lawyers wear wigs. Another is that people eat lemon drizzle cake. The third? That a lot of weird things go on.

Someone typed in neighbor wants to know everyone’s business uk. I can’t help wondering if they had someone specific in mind. Another was interested in british dog village life and a third in british neighbors and a fourth in miss marple village. If that last one is about Miss Marple’s village, it’s worth knowing that she’s a fictional character, living in a made-up village, where 150% of the population has been murdered. Visiting isn’t recommended. Or, strictly speaking, possible.

These were: what caused strange british traditions (sunspots) and why do english use chocolate eggs not hens’ to celebrate easter (the British have developed chocolate hens and those are their eggs, thank you very much). Don’t you feel better knowing that people are still out there wanting to learn about other cultures?

One person wanted to know about british schoolgirls in uniform and wanted to know it three times. He (and yes, I’m making assumptions; wanna bet I’m right?) didn’t find any photos here but kept coming back anyway. Don’t think about it too much, because it’ll only upset you. Three wanted to know about Mrs. Baggit, including one who wanted to know where to buy a Mrs. Baggit sign. One wanted to know how to break into a british phone boxed. Yes, boxed. It should be easy, since the doors don’t lock—all you have to do is pull. Phone boxes are made that way—the phone company wants you to come in. Or used to when they could still make money on them. The hard part these days is finding one. Maybe the real question was how to break into the money boxes inside them, in which case save your energy, because they’ll be empty.

Someone asked about jack rusel parkins, which baffles me since a jack russell is a dog and a parkin is a kind of cake. Google jack russell parkins, though, and you’ll end up with links to sites about the parson jack russell, which is a specific kind of jack russell.

Someone else seems to have mistaken Google for email and wrote “perhaps you would like to come for lunch or afternoon tea on a s…” It struck me as so forlorn that I’d have gone if I’d known who wrote it. If they weren’t too far away. And if—well, never mind. It’s not going to happen. But I did put quotation marks around the invitation to buffer it from this harsh world.

Other people wanted to know: who funds cornwall gay pride (Moscow); what a crooked stile is; why I (or some vague set of someones) think Britain is called great (in case you’re keeping track, I capitalized that because it’s paraphrased, but what I or whoever thinks is pretty much irrelevant to even a semi-serious answer); the metric system in great britain; winter in cornwall; british sex scandal blog spot; and she steps on snails (oh, indeed she does).

A final searcher was looking for notes from the uk. And found it. Which sounds like the ending to a kid’s picture book.

60 thoughts on “What the world wants to know about Britain”