According to Kate Fox in Watching the English, you don’t tip bartenders in England (and by extension in Britain), you buy them a drink. Which I always thought was code, in the U.S. at least, for I’ll leave you the price of a drink and you decide whether to drink it or put the money in your pocket. Admittedly, I never spent enough time in American bars to know the rules, so no one should take my word for that. But in Britain it really does mean I’ll buy you a drink. Which the bartender will eventually drink, nodding his or her thanks to you.

Of so Fox says, and I’m sure she’s right. She sees this as marking a sort of official class equality between bartender and customer, regardless of what the class divisions (and oh, will both sides ever be aware of them) are. 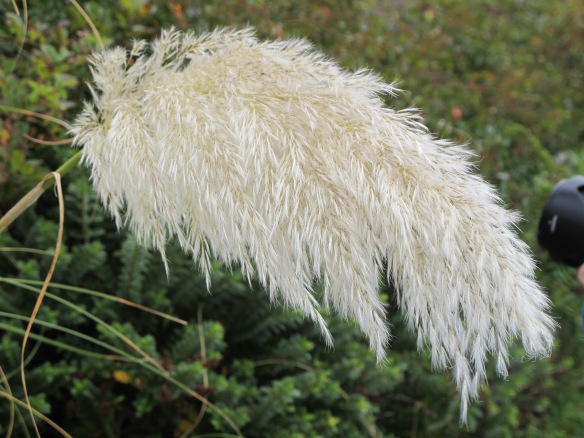 Screamingly irrelevant photo: pampas grass (and the tip of Wild Thing’s lens). I think it’s called something else here. Don’t you love it when I’m informative?

(I haven’t given you a link to Fox’s book this time, although I have before. I’d link back to the embedded link but I can’t remember which post it was in and, hey people, I only get just so much time on this planet. Besides, you know how to find a book, right?)

But back to our topic: In the only pub where I spend much time—and that only because I like the singers night—the bartenders are also the wait staff, and they do get tipped for serving meals, so it takes a finer eye than mine to figure out the distinction. But it’s true that people don’t tip at the bar.

Except me. For a long time I behaved myself and didn’t tip when I bought a drink, but I’ve worked for tips, as both a cab driver and a waitress, and after a while I just couldn’t help myself. I started tipping. Sometimes at first I had to explain myself—one or another of the bartenders would think I’d miscounted my money and return the extra.

I also remember saying, “I’m awkward but I mean well” since I hadn’t managed to make it clear that I was tipping—although in the U.S. I expect it would have been more than clear enough.

But no one seems insulted. The tip goes into the jar with the tips from the tables and my behavior goes into the Weird American category.

This comes up because Dan Antion commented that before he visited the U.K. he read that the British don’t tip, so he didn’t.

Sorry Dan, but they do. Not as much as Americans—or at least not as much as New Yorkers and Californians. Midwesterners are more, um, cautious with their tips. Or stingy, if you like. I haven’t done a full survey of the two coasts or of the south and west, so I won’t go out on a limb about how they tip. But the British? They tip wait staff in restaurants and (mostly) in pubs. Either many or most cafes have tip jars. And if they don’t? Wild Thing and I leave the tip on the table.

As far as I can tell, people tip cab drivers. We sure as hell do. And if something gets delivered that’s a pain in the neck for the delivery person, we tip—which often involves offering the money for a drink after work, which may or may not turn into a drink but who cares?

Around the holidays, some people we know leave money for the folks who pick up the trash and recycling and who deliver the mail—although the last one is, I think, never supposed to happen and the post office is probably coming to arrest me for even writing about it, never mind doing it. (I never said I did it, Your Honor, I only implied it. And I could’ve been lying.) Anyway, you can call those tips or Christmas presents or whatever you like. They happen, although not universally.

I’ve been reading, both online and in the papers, about campaigns to stop restaurant chains from stealing their employees’ tips. Yeah, some do that, both in Britain and in the U.S., especially if the customer puts the tip on a credit card with the rest of the bill, but sometimes even when the tip’s in cash—or in some cases if there’s no tip at all, because the restaurant acts as if there was one and charges the waitron what it figures he or she must have gotten. And it’s all okay, because if a businessman can’t steal from people with less power and money than him, how’s he supposed to make an honest buck?

Social media’s been effective at shaming the shit out of some chains that did this, but I expect others are still at it.

So whatever country you live in, tip, and do it in cash. And follow Wild Thing’s dictum: Nobody ever went to hell of overtipping.