People in fourteenth-century Europe were desperate to get their hands on saffron, which they used, among other things, as a medicine against the plague. Or they were if they could afford it, which most people couldn’t because it was wildly expensive, so let’s add “rich” before “people” in that sentence. It was expensive enough that pirates often preferred saffron to gold–it was worth more and easier to lift.

C’mon, even pirates can get bad backs.

How saffron got to England

According to legend, saffron got to England as an illegal immigrant, traveling inside a Crusader’s hollow staff. He picked it up, still according to legend, returning from the Middle East by way of Spain, and if you’re a fan of irony, you might enjoy knowing that it was  the Arabs–the people that hollow-staffed Crusader would’ve been fighting–who brought saffron to Spain so he could steal some.

Why did the Crusader (in a sanitized version of the tale,he was a pilgrim) have to smuggle it? Because he’d stolen it. Places that produced saffron wanted to prevent competition, so for example Basel (which admittedly wasn’t in Spain, even during the Crusades) made it illegal to take a corm out of the city and guards protected the plants when they were growing. 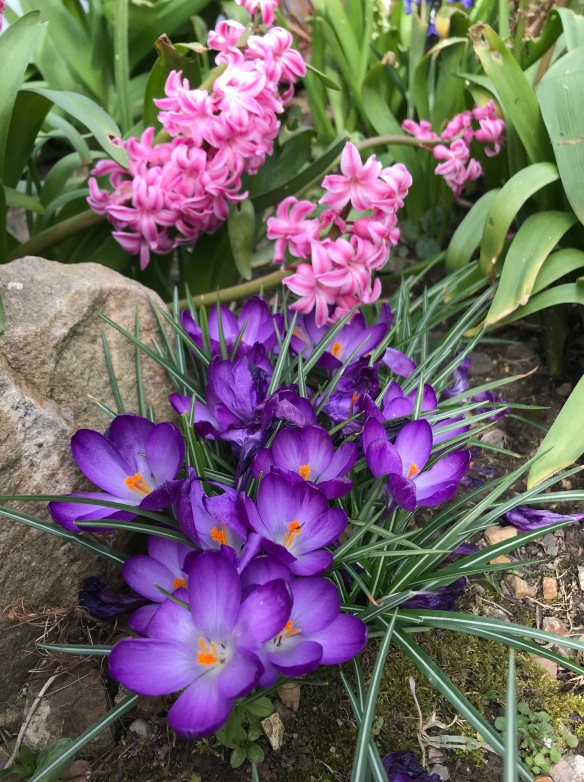 A rare relevant photo: The ones in the foreground are crocuses.

Was that true in Spain? Dunno. It’s a legend. Let’s slip that illegal corm into a pocket and move on before anyone notices the geographical switcheroo.

What’s all this corm business, though?

Well, kiddies, saffron comes from the crocus plant–the Crocus stativus–which grows from a corm. And a corm is what you and I, in our ignorance, would probably call a bulb. The difference is that a corm is–oh, hell, it’s complicated. A corm is rounder than a bulb and it’s solid. That’s enough to let us pretend we know something.

You can probably smuggle a corm inside a hollow staff if you don’t pound it around too much and if you just happen to have a hollow staff on hand, but whatever happened took place outside the range of the CCTV cameras, so we’ll never know for sure.

A different version of saffron’s British history has it landing in Cornwall multiple centuries earlier, not necessarily as a corm but in the form of a spice that could be traded again and again for Cornish tin. As far back as three thousand years ago, Cornwall was trading with the Middle East, so it’s entirely possible that tin was traded for saffron, but the ice is getting thin here and we might want to scuttle back to shore before we break through.

Before I dump a new subread on you, though, I should explain that the word sativus in Crocus sativus doesn’t mean the saffron crocus is related to Cannabis sativa. Sativa or sativus is Latin for cultivated, not for formerly illegal and still mind bending.

How to get from crocus to saffron

So much for legend. What’s clear is that saffron arrived in England (and by this time Cornwall was part of England), and from the fourteenth century onwards it was an important commodity. It was used in dying, in cooking, and in medicines, and (sorry to repeat myself) it was and is incredibly expensive. These days, it’s the world’s most expensive spice.

That’s not because it’s rare or hard to grow–make a crocus plant happy and it will spread all on its own–but because you only use a small part of it to make saffron. According to the Britannica, “What we use . . . is actually the stigma (plural stigmata)—the pollen-germinating part—at the end of the red pistil, the female sex organ of the plant.”

Harvesting those tiny little sex organs (try not to think about it; you’ll be happier) involves crawling along the ground and cutting a very low-growing flower, then throwing away most of it. Along the way, you have to separate the stigmata (each plant has three) and their stems (those are the pistils) and dry them.

The next most expensive spice, vanilla, sold for $600.

Could we get back to English history, please?

Fine. If we can agree that the stuff’s expensive, we’re ready to go back and look at it as a luxury item.

Starting in the fourteenth century, England became a major producer of saffron, and the chalky soil of Essex and south Cambridgeshire turned out to be well suited to it. Smallholders–people raising crops on small amounts of land–who’d once been subsistence farmers planted it as a cash crop, probably not replacing all the crops they lived on but as an addition. An acre planted in crocuses could bring in £6–a hefty amount of money at the time. Saffron became so important to the local economy that the town of Chipping (or Chepyng–they couldn’t spell for shit back then, but it  meant market) Walden changed its name to Saffron Walden.

According to the historian Rowland Parker, successful cultivation depended heavily on unpaid labor, which was a major part of the farm economy for a couple of the centuries we’re talking about. Serfs owed labor to their lords. Smallholders had families, preferably large ones.

I relied on WikiWhatsia for that. I avoid it when I can, but I’m tired this week and can’t be bothered. My apologies to the world at large. In general, it’s as reliable as the grown-up encyclopedias, but when it fucks up it can do it spectacularly. And I did confirm a few bits, so the entry looks reliable, at least at the moment.

The Cambridge colleges used saffron heavily. Smallholders who rented land from them could pay their rent in it, and some of the colleges used it to pay their own bills, making it a kind of currency.

But currency or not, academics also used it in food and as medicine. And they sprinkled it on floors and tossed it into their fires (talk about burning money) as a disinfectant. That was probably just a few academics–the richest ones, making a point of being the richest ones.

Nothing lasts forever, though, does it?

Change came in response to several things. As the spice trade grew, other offerings became available, and they weren’t only new and exciting, they were cheaper. The elite could spend their money on vanilla, tea, chocolate, and coffee. All of those were outrageous luxuries for a while.

Saffron? That was so last century.

Synthetic dyes also began to replace natural ones. And as the wage economy grew, people left the countryside and that pool of unpaid labor wasn’t around to dip a seasonal bucket into. Growers replaced saffron with the newly introduced crops: potatoes and corn.

Corn? Sorry. I’m still basically American. The British call it maize, since they call pretty much any old grain corn.

If that list of changes doesn’t sound like enough to explain saffron’s decline, consider the Puritans, who wandered in to disapprove of this saffron-burning culture of excess. They wanted their clothing plain, their food plain, and their fires unbothered by show-off gestures.

Saffron cultivation and usage declined, but in Cornwall, saffron buns and saffron cakes are a long-standing tradition.

How long-standing? The sources I’ve found hide behind some vague wording about them being traditional, which means they don’t have to commit themselves on how far back the tradition goes.

I haven’t posted a recipe in an age, but I do make a mean saffron bun–and if you don’t speak American, mean in this context is a good thing. In spite of my accent, they sell well at bake sales and the local farmer’s market.

Don’t be put off by what I said about the cost of saffron. You won’t be buying it by the pound. All you’ll need is a pinch.

A large pinch of saffron

90 grams currants (or raisins if need be)

Milk (the recipe I started with calls for 120 milliliters, but I always need more)

What to do with the ingredients

Crush the saffron and soak it in just enough boiling water to cover it. Cut the butter into the flour. Mix in the sugar, salt, yeast, and fruit. Add the saffron, in its water, and enough milk to form a dough. Don’t let it get too wet, because the buns have to hold their shape.

Knead it until it’s silky–about 10 minutes by hand, about 5 in a mixer. Cover and let it rise. How long will depend on the temperature of your kitchen, but if you have to punch it down and let it rise again, it’ll be fine.

Cut into 8 pieces and form into rolls. Bake them on a cookie sheet–called a baking tray in Britain–and use greaseproof paper or baking parchment if you have it. Otherwise, oil the tray.

Let them rise half an hour or so, until the dough has a little spring in it.

Cool. Butter. Eat. Toast if that appeals to you.