Britain’s back in lockdown and the number of Covid hospital admissions is higher than at the pandemic’s first peak. Go, us! The prime minister loves to set records. That’s why we had such a lovely Christmas germ exchange.

Having reopened for exactly one day, the primary schools are now shut again.

To explain the logic behind that, we go to Boris Johnson’s public statements. On Sunday he told us, “Schools are safe and . . . education is a priority.” On Monday he told us kids could (who knew this?) “act as vectors for transmission, causing the virus to spread between households.”

Well, yes. Who would have thought that transmission thingy on a Sunday? It takes the cold light of a Monday morning for that to make its way through the fog. 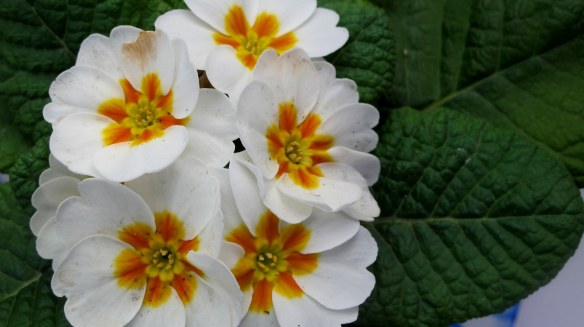 Irrelevant photo: Primroses. This is the season for them. Almost everyone around here is complaining about the cold, but I feel very lucky to live in a climate where flowers bloom in the winter.

By Tuesday, Johnson had added the word alas to the situation. He says alas a lot. Maybe he always did, but he’s given himself so many reasons to alas this past year that someone I know set up a drinking game before his most recent press conference that would have her taking a drink every time he said alas.

In fairness, she had a fistful of other phrases that would trigger a drink. I haven’t checked back to see how many bottles she emptied, but if she played the game at all (questionable, since drinking games like a cheering crowd and we’re not in crowd mode just now) she’ll still have the hangover.

Unlike schools, preschools–or nurseries, if we’re talking British–will be staying open, and Purnima Tanuku, the head of the National Day Nurseries Association, said, “What we didn’t hear from the prime minister . . . is the reason behind the decision . . . to keep early years and childcare open, i.e. the science behind it.”

Maybe in next Monday’s cold light the figures will surprise us, alas, and be forthcoming. At which point the preschools may also have to close.

Tanuku did say that with not many kids attending and staff being out sick, many of them weren’t likely to stay open for long anyway.

Cynics suggest that they’re staying open because it’s harder for people to work from home with a three-year-old underfoot than with an eight-year-old. In other words, forget health, it’s all about the economy.

The data on how effectively kids spread the virus is still contradictory, but a study of Florida elementary schools and high schools shows that Covid infections went up after they reopened. Florida’s  statistics list an infected person’s age and county, which makes it a handy place to study.

After high schools reopened, infections went up almost 30%. For elementary schools (that’s kids age 6 to 13, so it seems to include middle schools or junior highs), that was about 20%. The study didn’t include preschools, but in times like these a person who happened to be prime minister, alas, might want to be make his mistakes on the side of caution.

Meanwhile, the Institute for Fiscal Studies tells us that the pandemic’s widening Britain’s inequality gap. More surprises, right? Poorer communities have taken a harder financial hit and their members are dying at roughly twice the rate of richer communities. Black and minority ethnic groups also have a higher death rate, in part as a result of disproportionately holding jobs that put them front lines.

Kids from poorer families are hit harder by school closures. And people under 25 are twice as likely as older workers to have lost their jobs.

The IFS has made several sensible recommendations to ameliorate the damage. Isn’t that nice? They’ll be ignored.

New technologies that seem to be on the way

A new Covid test has been developed that not only gives a faster rapid result (five minutes as opposed to 20 or 30) but is accurate. It works by converting DNA to RNA and combining it with a technique called EXPAR. It will be called RTF-EXPAR.

After that, unfortunately, I ran out of capital letters and couldn’t understand a thing. But it’s all very promising, they’ve applied for a patent, and they’re trying to get the beast into production.

If it works, it could be used for any RNA-based infectious agent or disease biomarker, including cancer.

I don’t know about you, but I understood the “including cancer” part of that sentence. The rest of it kind of went over my head, but I was impressed anyway.

You know neutralizing antibodies, right? They’re the ones you met at the neighbors’ just before lockdown sent us all scuttling back inside our own four walls. They’re the tiny beasties that keep the virus from infecting your cells, and Medical Express tells us that “emerging research suggests neutralizing antibodies offer the best protection against the virus.” So learn to recognize them and say hello nicely when you see them, please.

Tests have been able to measure them before this, but not quickly, easily, or cheaply. And not accurately. Other than that, though, they’re great.

Since we’re dancing on the edge of what’s known–especially in countries like Britain that are deciding to administer one dose of a two-dose vaccine–monitoring immunity (your own; the general public’s; everyone’s) could be useful, she said in a masterful use of understatement.

In these dark times, it’s comforting to know that the waters of political absurdity are forming such a gorgeous ocean.

What would the police do without burned-out tail lights?

I’ve read that the Black Lives Matter movement is boycotting the protests outside the convention, feeling that their movement was being hijacked by the protest organizers, but I’m guessing that both the city government and the police were already edgy about the Black Lives Matter movement anyway, and became more so after cops were shot in several cities. The shootings don’t seem to have been by movement activists but they were surely related to the anger that fuels the movement.

So let’s guess that Cleveland’s cops, and possibly the city government, are less than happy knowing that firearms are washing around legally.

So what does a nervous city do? It establishes a zone around the convention center and bans a variety of other things there, including toy guns, umbrellas with sharp tips, knives, ropes, and tennis balls. It sounds like the weapons from a game of Clue (or Cluedo, in British). Inside the convention center, the Republican Party itself has banned fresh fruit. And canned fruit. And—what will the National Rifle Association say?—real guns.

So, to sum up, you can carry a real gun near the convention center but not a toy gun. Or a tennis ball. And you cannot attack the candidate with a sharpened banana.

Update: I just read that when a number of armed blacks (as opposed to armed whites) began showing up on Cleveland’s streets, the head of the police union asked the governor to suspend the right to carry arms openly. “I don’t care if it’s constitutional or not,” he’s quoted as saying.

I have some sympathy for cops operating in a world that’s awash in guns, but this serves as a reminder that very little in the U.S. is racially neutral.

In a deep bow to the state of the world’s economy, the convention’s being held in the Quicken Loans Arena. Quicken Loans is a mortgage lender. I don’t know that there’s anything dodgy about it, but I can’t get the phrase subprime loans out of my head. I’d weep if I weren’t laughing so hard.

Meanwhile in the U.K., Boris Johnson—one of the leaders of the Brexit campaign, whose career briefly looked like it was over when his fellow Brexiteer Michael Gove destroyed his chance of being Prime Minister—held his first press conference since being appointed foreign minister. It was a bumpy ride. He was asked if he planned to apologize for the less than diplomatic thing he’s written and said about world leaders. What did he say? In the one comment that’s (more or less) quoted, he called Obama half Kenyan and a hypocrite. We’ll let that stand in for the rest. Having followed Johnson a bit in the papers, I have no doubt there’s plenty more.

In addition to his diplomatic skills, Johnson’s known for playing fast and loose with the facts—he lost his first journalism job for faking a quote and went on to make a career out of exaggeration, distortion, and various other forms of inaccuracy—and reporters took him on for some of the “outright lies” he’d written. I’m not sure who I’m quoting there. Presumably one reporter, not all of them.

Fun. But not half as much fun as his references to the crisis in Egypt, by which he apparently meant the crisis in Turkey. And in case you think it was a slip of the tongue, he said it twice.

So that’s Britain’s new foreign minister. Turkey, Egypt, you know, what’s the difference? They’re all a bunch of foreigners.

Sleep well tonight, my fellow citizens of planet earth. The world’s in good hands. And I’ll be back on Friday with something less political.