In a protest over the Welsh government’s ban on stores selling nonessential goods during the current lockdown, Chris Noden turned up at a supermarket in nothing but his undies and tried to shop while his wife followed along behind and recorded everything on her phone. A store employee kept him from going in, and as soon as Noden got him to admit that clothing was essential, he decided he’d made his point and left.

“I understand they have to control crowds in shops,” he said later, “but if someone really needs something or an item, what is it to stop them? They are actually blocking these aisles off with sweets, chocolate, bottles of vodka, whisky, lager, they are blocking it off with all nonessential items, essentially. I don’t know what is essential or not, it is a bit mad, like.”

What he’s talking about is that supermarkets blocked off areas selling nonessentials.

It’s true that he does seem to get stuck on a thought and repeat it, but he managed to make his point all the same. It’s also true that he didn’t just wear his undies. He also wore shoes, socks, a mask, and a tattoo.

My thanks to Ocean Bream. If it hadn’t been for her, I’d have missed this and what a tragedy that would’ve been. 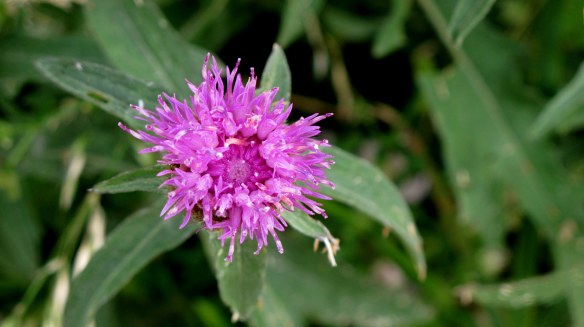 Irrelevant photo: If I remember right, this is a thistle. Gorgeous, isn’t it?

Meanwhile, on October 29, British papers reported that nearly 100,000 people a day were catching Covid in England. That’s based on a study by Imperial College London, which also estimated that the rate of infection was doubling every nine days. That takes us close to the peak of infections last spring, although the death rate for people who have severe Covid is down from last spring, probably because a lot’s been learned about how to treat it.

Every age group in every region shows growth in the number of cases. In London, the R rate–the number of people each infected person passes the disease on to–was 3. The Southeast, Southwest, and East have an R rate above 2. On a national average, it’s grown from 1.15 to 1.56.

Regional lockdowns in the north may have slowed the spread, although they don’t seem to have stopped it. The government is frantically trying to avoid a national lockdown.

But it’s all going to be okay, because the government has plans to do a Covid test on 10% of England’s population every week, using tests based on saliva, which are easier to manage than the current ones and give a result in thirty minutes. The plan is ambitious, headline-grabbing, and badly thought out. In other words, pretty much what anybody who watches this government would expect.

The idea is that local directors of public health will “be eligible to receive” tests “equivalent to” 10% of their population. Which is a roundabout way of saying that’s how many tests they’ll get, but with a small escape clause in case someone needs to wriggle through the definitions of equivalency and eligibility. A properly motivated politician could emerge from that snarl rumpled and stained but still claiming victory.

In a moment of heroic bad planning, the project was launched without anyone talking to the local governments and health officials whose cooperation it depends on.

What will the program expect of them? The head of the test and trace program, Dido Harding, said local authorities will “be responsible for site selection and deployment of [lateral flow] testing in line with their priorities.”

Lateral flow? Oh, come on, you know that. It’s what happens when things flow laterally, which is to say sideways.

I thought it would.

But it’s even better than that, since we’re translating. Things will flow not just sideways but also in a line with their priorities, which we can assume run sideways.

Whose priorities? I’m not entirely sure. Local governments’, probably, and they’ll get to choose their priorities by picking Option A or Option A. That way it’ll be their fault if Option 3 turns out to have been the obvious choice. Honestly, anyone would’ve been able to see it.

And no, I didn’t add that “[lateral flow]” business. That was some desperate reporter trying to condense a document full of waffle and bureaucro-speak.

So are local people wild about the program? Not demonstrably.

An anonymous director of public health said, “There is no point in testing large numbers of the population unless you do something with the results. We really, really want to improve testing and tracing, but once again this is the wrong way to go about it.”

Another public health official–a senior one, whatever that may mean, and also  anonymous–said, “We don’t know who does the contact tracing or how the workforce [to carry out the tests] is resourced. [That means paid for–and this is my addition.] We are trying to work out how this fits with the test-and-trace strategy with PCR testing and how any positive results are followed up and people are isolated.”

And yet another anonymous senior public health official said, “They have come to us with a proposal that is poorly thought through. It is not clear what the cost is or the amount of work involved and there is nothing about contact tracing.”

As for the existing test and trace system, it might just meet its target of testing 500,000 people a day by the end of the month, but it’s done it by getting the results back to people more slowly than promised–sometimes at half speed–and bungling the tracing element. One in five people who test positive and are referred to the tracing side of the system are never heard of again. They’re abducted by flying saucers and held out of range of cell phones–or if you’re British inflected, mobile phones, whose name only promises that you can move them around, not that they’ll work where you so foolishly brought them.

Are those lost people isolated while they’re there so they can’t pass on the virus? That’s the thing: We don’t know. But if you will get yourself abducted by flying saucers, you can’t blame Dido Harding for it, can you?

It’s also possible that the system’s missing more than one in five people. It depends when you wandered into the movie. Another article says less than 60% are reached, so that would be two out of five.

Oh, never mind the specifics. It’s all just a lovely, poetic way of saying the program’s a mess.

One article I found included an example of the kind of snafu that happens in the vicinity of the test and trace system: a small war over who’d pay for a portable toilet at a mobile testing station. The central government (I’m reasonably sure that would be the test and trace program itself) refused. Because they’re test and trace, after all, not test and toilet. That left two local entities playing hot-potato with it for days. In the meantime, the station couldn’t be set up, because no matter how little you pay people, and even if you put them on zero-hours contracts, they will want to pee eventually.

However hot that potato was, though, it’s a small one. Here’s a considerably larger one:

After advertising for people with a health or science degree (or an equivalent something or other) to work with experienced clinicians  in the English test and trace system, Serco–a private contractor–instead upgraded a bunch of people who were already working there, people with no relevant degrees or experience and who were working for minimum wage. That’s £6.45 an hour if you’re between 18 and 20 and £8.72 if you’re over 25.

You may have noticed that some years are missing there. That’s okay. Most of the callers are in the 18 to 20 group.

The job as originally advertised–the one the minimum-wage folks got moved into–was supposed to pay between £16.97 and £27.15 an hour. The people who got moved into the job are still working for minimum wage.

We can’t exactly say they weren’t trained. They got four hours of power-point training, an online conversation, a quiz, some e-learning modules (doesn’t that phrase send a thrill down your spine?), and some new call scripts.

“It’s been an absolute shitshow,” one highly anonymous caller told a reporter. The callers are talking to people who’ve lost family members. People who cry. People who are in pieces. And the callers’ training manual says things like, “If somebody’s upset, be patient.”

It leaves some of the callers themselves in pieces. They’re young. They have no training to help them deal with this. They’re in over their heads and they know it.

I can’t imagine the system’s working any better for the people they call.

Somewhere in between advertising the higher pay level and giving the job to people at the lower one, the Department of Health and Social Care made a decision to split the job in two. The first set of callers would make the initial calls and then “qualified health professionals” would follow up.

But Mr, Ms, of Mx Anonymous says, “There is no other call by a trained clinician.” The callers read out a list of symptoms, refer anyone who needs medical advice to 111, the Covid hotline, and only if they decide that there’s an immediate risk do they pass calls to a clinical lead.

So this is, on average, a 20-year-old being asked to decide if there’s an immediate risk. No disrespect to 20-year-olds–I was one myself once–but you don’t have a lot of life experience to draw from at that age.

Have I mentioned that the test and trace service is privatized? And that to date it’s cost £12 billion–more than the entire budget for general practice. More than the NHS capital budget for buildings and equipment.

Which is one reason that a group of doctors have called for the money to be diverted to local primary care, local NHS labs, and local public health services. Local, local, and local.

I’m not expecting anyone to listen to them.

And so we don’t end on a completely sour note, Taiwan has marked 200 days without a domestically transmitted Covid case.

Its success is due mostly to reacting early and sanely: establishing coordination between government departments; emphasizing the use of masks; quarantining new arrivals. It didn’t hurt that both the strategy and communications with the public were led by experts.

It’s a radical concept, but it just might work.