The British government’s wants a fast Covid antibody test to use in mass screenings before the end of the year, and it’s focused on the test made by Abingdon Health, which uses blood from a finger prick, and is, Abingdon says, 99.4% accurate.

But Jon Deeks, a professor of biostatistics and head of the University of Birmingham’s test evaluation research group, says Abingdon hasn’t published enough data to show that the test can be trusted. Without that, no one can know if Abingdon gamed the system by selecting blood samples with high antibody levels. Doing that is sort of like showing someone the top line of the eye chart, the one with a single big letter. They may read 100% of the letters correctly, but that doesn’t mean they should be driving.

Other companies have antibody tests that UK universities have validated and that are selling around the world, but they can’t seem to get the government’s attention. It saw Abingdon across a crowded room, fell in love, and has eyes for no one else.

I can’t offer you any statistics on how many of those relationships work out in the long term, but I’m going to claim that, after a few passionate and agonizing months they turn out to be the disaster that everyone else predicted.

You know what this country really needs to raise morale as we face a season of shorter days and slowly rising infection rates? Another governmental fuckup. Because I don’t know about anyone else, but I have moments of madness when I ask myself, What will I write about if they start getting this thing right?

Those moments. They don’t last long, but they’re disturbing. 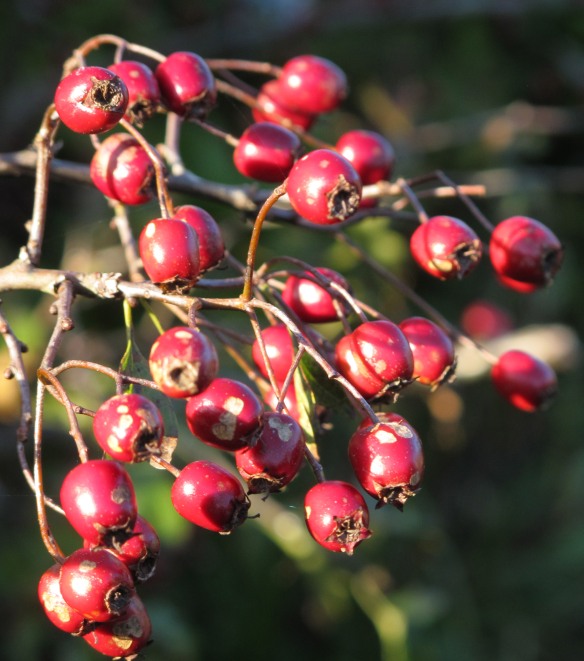 Irrelevant photo: As we inch toward fall (or autumn, if you like), we have red and orange berries. So here are red berries. I have no idea what they are.

Reassuringly, as researchers, governments, and companies the wide world ‘round rush to find not just a vaccine but the vaccine–by which I mean the first vaccine–the World Health Organization’s Solidarity Vaccines Trial Expert Group warns that a bad vaccine could manage to make this mess worse.

Is that cheering I hear? Yes. Thank you. I will have no shortage of things to write about. All I need is time and energy.

So what’s the group’s problem?

“Deployment of a weakly effective vaccine could actually worsen the Covid-19 pandemic if authorities wrongly assume it causes a substantial reduction in risk, or if vaccinated individuals wrongly believe they are immune, hence reducing implementation of, or compliance with, other Covid-19 control measures.”

In other words, people will get the vaccine, think the pandemic’s over, and rush out to scoop up some virii and spread the little bastards. I’ve imagined myself acting in ways that would accomplish that.

The group says any vaccine should be 30% effective to get approval, but it recommends at least 50% effectiveness. Allowing for 95% accuracy, that translates to 30% in practice.

Did that make any sense of you? Me neither, but then it involves numbers, so I wouldn’t expect it to. I’m a word person.

They point to the danger of governments pressing for quick approvals for their own political reasons rather than comparing vaccines and finding the best one–which may not be the first.

As parts of England face localized spikes and people are told to self-isolate (who invented that phrase and can I slap them?), the government has noticed that people still need money when they can’t work. At least they do if they plan to pay the rent and put food on the table. If they can’t do those things, they may be oddly reluctant to stay home.

This is a step forward, but not a big one, because a trial program will offer people who meet certain criteria the princely sum of £13 a day.

What criteria? They’re complicated. I sank. I do not get to pass Go. Or collect £13.

Human adaptability knows no limits. When forced to cope with the unnatural situation that we called lockdown, Britons bought boxed wine–300% more from the Co-op, 40% more from Marks & Spencer, 41% more from Sainsbury’s.

Human credulity also knows no limits. A study by Avaaz (“a U.S.-based nonprofit organization . . .  [that] promotes global activism on issues such as climate change, human rights, animal rights, corruption, poverty, and conflict) reports that in April the top ten Facebook pages with false information and conspiracy theories had four times as many views as the top ten reputable sites.

A separate study in the American Journal of Tropical Medicine and Hygiene found 2,000 claims about Covid on social media, and 1,800 of them were false. That covered 87 countries.

Boris Johnson spoke to schoolkids as part of his effort to appear to be doing something in the midst of the pandemic, and the Twittosphere noticed that the books behind him sent an interesting message. The titles included The Twits, Betrayed, Resistance, and Fahrenheit 451.

It turns out they did indeed send a message, but it wasn’t meant for Johnson. The librarian had set them up six months ago, when she resigned, and no one had noticed.

Sometimes if you want to make a point, subtlety isn’t your best bet.

Johnson’s speech, standing in front of the books, wasn’t subtle but it was largely incomprehensible. He blamed a mutant algorithm for messing up the grades in a test the kids hadn’t taken because he hadn’t bothered to check how old they were, told them Harry Potter wasn’t sexist, blithered a bit about his own school experience, and made a passing reference to the supine stem of confiteor in order presumably, to let them know that he studied Latin and was better than them.

It’s a pointless story, which unfortunately doesn’t have a punchline, but then it was a pointless moment in the career of a politician who seems like a good fit for pointlessness.