The latest thing in conspiracy theories: It’s the news from Britain

Britain has a special relationship with the US, although Hawley’s Small and Unscientific Survey indicates that only Britain is knows about it. But never mind that. It’s so important that Britain sometimes gives it capital letters: the Special Relationship.

In fairness, Britain hands out a lot of capital letters, so Americans, don’t let that go to your head.

But special relationship or no special relationship, Britain doesn’t like taking second place, even in the production of conspiracy theories, so we’ve come up with a nice one that’s all our own: The security guards who attended King Charles–that’s the monarch formerly known as Prince–at his mother’s funeral used fake hands so they could keep their real ones on the weapons hidden under their coats.

Well, of course they did. I’ve seen photos circulating on TikTok, and they show the security guys keeping a tight grip on their hands, as if they were afraid they’d drop off.

Yes, people do stay up nights to work this stuff out.

The paper I found this in seems to have found it credible enough that they trotted out a security expert to explain why that wouldn’t happen in the UK, although it might, of course, in the US.

Isn’t it interesting what people think of the US? We’re a nation where people could, imaginably, hide an extra pair of arms under their coats. 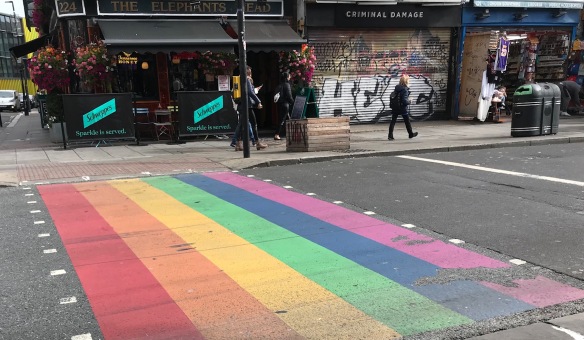 But that’s not what the expert addressed. In the US, he explained–and this comes in the form of an indirect quote from the Metro–“close protection officers are more ‘trigger happy’ . . . but the ‘risk is too high’ in the UK.”

In other words, you might be able to run around shooting people at royal funerals in the US (assuming, of course, that you can find a royal funeral), but you can’t do that in Britain.

No one seems to have asked how long it would take security guys in any country to break their real arms loose if they did need to get trigger happy, but before I’m going to get on board for this one I need an answer.

But let’s move on

Do you ever wonder why so many conspiracy theories are on the loose lately? It’s a desperate effort to make sense of a  world that’s falling apart.

That’s not meant as a joke.

So what’s the British government doing to hold it all together? Well, we have a brand new government, cobbled together by the Conservative Party, which still has a hefty majority in Parliament. Already, though, the shine’s coming off it. It–this is the government we’re talking about in case you’ve lost track–announced a new mini-budget that, in the face of a population increasingly desperate about inflation, promised a tax cut for the richest eighteenth of a percent of the population. It would fund that by borrowing money that it would pay back when pigs fly in formation past the Houses of Parliament waving lion-and-unicorn banners and singing “The Marseillaise.”

Why “The Marseillaise”? Irony, that’s why. Their long and less than happy relationship with humans has led pigs to develop a sharp sense of irony.

The pound promptly tanked. That’s the vote that really matters, so the political world came to a rolling boil. MPs in the government’s own party publicly attacked the idea, attacked the prime minister, attacked the chancellor, and attacked Larry the Cat, who in fairness isn’t even in the cabinet.

Larry the Cat accused the government of being stingy with the cat treats.

The prime minister said she wouldn’t back down.

The prime minister repeated that she wouldn’t back down.

The prime minister backed down, but only on the most controversial tax cut, not on other problematic parts of the budget, which I’ll skip over. Come on, do I look like a newspaper? When the details overwhelm the humor, I have to move on.

The prime minister won’t rule out reinstating the tax cut.

Larry the Cat upchucked a lightly used mouse head on the steps of Number 10.

In the meantime, the government that won’t commit to increasing benefits (Americans can translate that welfare and similar programs) in line with inflation. People–and not just the poorest ones–are seriously worried about how to heat their homes, food banks are deluged, and the National Health Service is coming apart at the seams.

And we’re hearing a lot of talk about power cuts this winter.

But compassion isn’t completely missing. I recently stumbled over an expensively printed flier with advice on reducing fuel poverty. Some sponsors are in small enough print that I’m not sure if it’s only from the Cornwall Council or if it’s national as well, but hey, if I had anything to do with it I’d want my name in small print as well.

What does it advise us to do?

Thanks, guys. I don’t know what we’d do without you.

To be fair, they also give us a handful of phone numbers to try, but I wouldn’t hold my breath about any of them solving people’s problems.

So what does the Department for Fiddling While Rome Burns say?

The government’s addressing the important stuff, though. Therese Coffey–the new health secretary who sports an accent in her first name but I can’t be bothered searching the depths of Word to find it–has taken a tough stand on the Oxford Comma.

I’m not exactly British, so I’m not the best person to ask, but back in that big country on the other side of the Atlantic, I learned to call it a series comma. By either name, it’s the comma you either do or don’t use before the final item in a list. You know, when you write to the health secretary and say either, “I find your advice odd, patronizing, and trivial,” or “I find your advice odd, patronizing [no comma, you’ll notice] and trivial.”

C’mon, this stuff is important.

I won’t try to explain why that’s called the Oxford comma in Britain, mostly since  I don’t understand it either, but Coffey’s agin it. (She wouldn’t approve of agin either, which is why it made its way in here.) She’d no more than located her new office and hung up her coat than she told civil servants to “be positive” in their communications with her, to avoid double negatives, and to not use the Oxford comma.

After that hit the headlines, her departmental flak-catchers jumped in and acknowledged that the memo was real but said Coffey hadn’t written it.

“There may have been a bit of over-eagerness” in the content, he, she, they [Oxford comma ahead], or it said.

Wouldn’t it be nice if they were half as eager to shorten the lists of people waiting for medical treatment, fill the National Health Service’s job vacancies, or fix hospital roofs? But those things take money. Oxford commas? They come cheap.

Yeah, but why’d the Conservative’s get a reputation as the Nasty Party?

Gee, I don’t know. I wasn’t here when it happened, but it’s not helped by people like Daniel Grainger, chair of the Young Conservative Network, who arrived in Birmingham for the party convention and tweeted that it was “a dump.”

He’s stepped down pending an investigation, although that may be over a different tweet–one that, sadly, hasn’t hit the headlines.

Well, a recent study reports that dogs can sniff out whether people are stressed. I haven’t read that the conference center was surrounded by stress-trained canines, but then I haven’t read that it wasn’t. And for all I know, those hands really were fake. Can you prove they weren’t?

Can we go back to economics, please?

Sure. The Ig Nobel Economics Prize went to Alessandro Pluchino and his colleagues for a mathematical explanation of why success so often goes not to the most talented people but to the luckiest.

Irrelevantly but irresistibly, the prize for medicine went to Marcin Jasiński and colleagues for showing that patients treated with cryotherapy–a form of chemotherapy that dries out the mouth, gums, and tongue–have fewer harmful side effects when ice cream replaces the ice chips they usually suck on.

They used Ben and Jerry’s, although I expect the improvement would carry over to other brands.