Can any country without a straw bear festival claim to have a culture?

Well, possibly. I hesitate to throw whole cultures into history’s extensive trash can. Especially since, no matter how much I try, they never do stay thrown.

But either way, let’s talk about the Whittlesea Straw Bear Festival. Because it exists. Because it takes place (when the country isn’t in lockdown) in January and this is June, and that makes it an obvious topic right now. And because I thought a quick break from the serious stuff might do us all good.

The festival started before Whittlesea’s collective memory kicked in, so no one knows how far back it goes. Britain’s full of events like that. This one involves what an 1882 newspaper called the confraternity of the plough. That sounds like an organized group but the writer was probably just trying for a cute and condescending way of talking about farm workers. 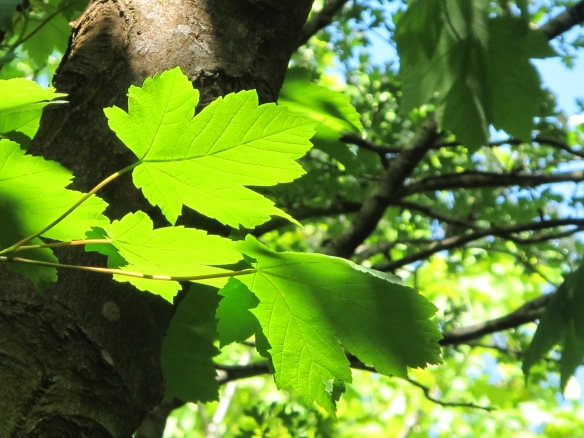 Irrelevant photo: No flower this time, just sunlight and leaves.

What does seem to be known–and remember to take everything with a teaspoon or two of salt because of that problem with collective memory–is that each year they’d pick a man or boy to be the bear. Then on Plough Monday (British spelling because what the hell it’s their holiday) they’d drag a plow (American spelling because I can only be well behaved for just so long) through town and lead the bear around, with lots of singing and dancing.

We’ll get around to the Plough Monday part later.

The newspaper article describes the straw bear dancing in front of  “the good folk who had on the previous day subscribed to the rustics, a spread of beer, tobacco and beef.” So basically, the well-to-do got entertainment and the badly-off got roaring drunk and went away with their bellies (and lungs) filled, and a good time was had by most.

Until the next morning. But there’s me spoiling the fun again.

As a counterbalance to that above-it-all description, let’s quote a book by Sybil Marshall about life in the fens in the 1890s. This isn’t specifically about the straw bear, but it’s close enough to be useful.

“Living where we did and how we did, we used to make the most of anything a bit out o’ the ordinary, and we looked for’ard from one special day to the next. Looking back on it now, I’m surprised to see how many high days and holidays there were during the year that we kept, and we certainly made the most of any that children could take part in at all. . . . The Molly Dancers ‘ould come round the fen from Ramsey and Walton all dressed up. One would have a fiddle and another a dulcimer or perhaps a concertina and play while the rest danced. This were really special for Christmas Eve, but o’ course the dancers cou’n’t be everywhere at once on one day, so they used to go about on any other special day to make up for it. They’d go from pub to pub, and when they’d finished there, they’d go to any houses or cottages where they stood a chance o’ getting anything. If we ha’n’t got any money to give ’em, at least they never went away without getting a hot drink.”

Whittlesea’s straw bear tradition lapsed in the early twentieth century, when a police inspector (speaking of spoiling the fun) decided the whole festival was a form of begging. Then it was revived in 1980, by (I’m taking a wild guess at this) either a group of guys who’d had too many beers or a group of promoters who decided it would bring the tourists in.

Or a group of promoters who’d had too many beers. Why have two groups when one will do?

These days the festival involves a procession with the bear and a team pulling a plow (or a plough, which with all those extra vowels has got to be heavier) through the streets, and of course music, dancing, and (I’m guessing, since I haven’t been to the festival) a lot of drinking. The festival website’s FAQs includes the question, “Can I drink on the streets?”

Answer: No. The cops are watching. Drink in the pub. Drink outside the pub but use a plastic glass. Play more or less nice.

The bear’s led around the town to dance in front of pubs, which is no mean trick because the costume weighs 5 stone.

A stone? It’s one of those insane, traditional British measures and it equals 14 pounds. Because who doesn’t like to multiply by 14? So 5 stone is–

Will you give me a minute here? I’m working on it.

It’s 70 pounds. Or 31.7515 kilos, give or take a gram. In other words, heavy enough that we should all be impressed by someone wearing it for long, never mind dancing in it.

At the end of the festival, the bear costume is burned.

It also involves molly dancers, and I thought we’d get to take a break from anything serious, but I never do know where a topic will lead me, so buckle up, kids, ‘cause it’s about to get serious.

According to the Morris Ring website, molly dancing traditionally involved white men blacking their faces and dressing in women’s clothes. The blackface may have been to disguise themselves or it may be good old-fashioned racism. It could easily have been one twisted around the other. At this point, I doubt anyone can unpick the threads.

The winds are blowing hard against blackface these days, and some molly dancing groups have dropped it. Others defend it on the grounds–and this is an argument I’ve never heard outside of Britain–that it isn’t (or wasn’t) meant to be racist, and so it isn’t racist. I’ve argued that through with more than one person and have yet to change a single mind.

The website of a molly dancing group called Pig Dyke explains its decision to drop blackface: They don’t want to be linked to the minstrel show tradition, where whites blacked their faces and played out a grotesque image of black people. It says, “Molly dancers in the past blacked their faces for disguise, weirdness, and loss of personal identity: we achieve that” without blackface.

I looked through the Whittlesea website photos hoping to find that all the groups had dropped blackface. They hadn’t. If I was around to ask the dancers why they still do it, I’m sure they’d tell me it’s not racist because it was never meant to be racist. And because they’re not racists. And I’d try to convince them that their intent (or the originators’ intent–take your pick) isn’t the center around which the universe pivots–that our intent doesn’t control our impact.

I’d leave wondering why I bothered.

I won’t take a guess at what they’d be thinking. I don’t expect it’d be flattering. So let’s leave them to be unflattering and talk about the dressing in women’s clothes part.

Pig Dyke connects the word molly to London’s molly houses, which were eighteenth-century gay and transvestite brothels. Whether they’re right to make that connection is anyone’s guess. There’s a strong British tradition of straight, non-transvestite men cross-dressing, and it’s widespread enough to make me think it was independent of the molly houses, although they may share a common root. But that’s guesswork. Let’s just chalk it up to another one of those collective memory blank spots.

I promised we’d get back to Plough Monday. The Molly Dancing website says it fell on ”the first Monday after Epiphany (or twelfth night) and was the first day after Christmas that farm-workers were meant to return to work, so they didn’t! Instead they decorated a plough and pushed it round the village, calling at the houses of the well-off villagers to beg for money. If the householders weren’t forthcoming with donations then they threatened to plough up the garden, or if there wasn’t a garden, the doorstep.”

That accounts for why the Morris Ring website says molly dancers ”could be destructive, drunk and disreputable.”

These days, no one plows up gardens or doorsteps, drinking on the streets is only allowed outside the pubs, and storytelling groups gather the kids around so that they can take home something wholesome–something full of mental fiber and emotional green vegetables.