Like so many other things, how you cleaned house in Victorian England depended on how much money you had. Money decided how much time you had, how much stuff you owned that demanded to be cleaned, and whether you cleaned it yourself or had other people do it for you. It decided how sooty your neighborhood was and how far you had to go to get water. But what people cleaned with didn’t vary that much.

It was heavy work, and all or almost all of it was done by women.

The Victorian era ran from 1837 to 1901, and baking soda was introduced in 1846. It was–well, the phrase I grew up with was that it was the aspirin of the its dayera, meaning you used it for just about anything, but aspirin isn’t the aspirin of our time anymore, so let’s say baking soda was the reboot of the age. It was the first thing you’d try, and it fixed a surprising number of problems..

Baking soda’s primary purpose was to raise your cakes, your quickbreads, and your scones, and it revolutionized baking   But it also cleaned your oven and your silverware.

True, most of us  wouldn’t have had silverware if we’d lived back then, but never mind that. It was so new and so amazing that it cleaned your imaginary silverware. All you had to do was set your imaginary silver in a mixture of baking soda and water and it would bubble away like some magic potion. You could also use it to clean copper pans or add it to dishwater, possibly because it made dishes easier to clean and possibly and possibly because everyone agreed that it did. What the hell. It was new, it was exciting, and so you’d toss it in..

How many times have you rebooted not because you knew it would work but because everyone knows it’s the place to start? 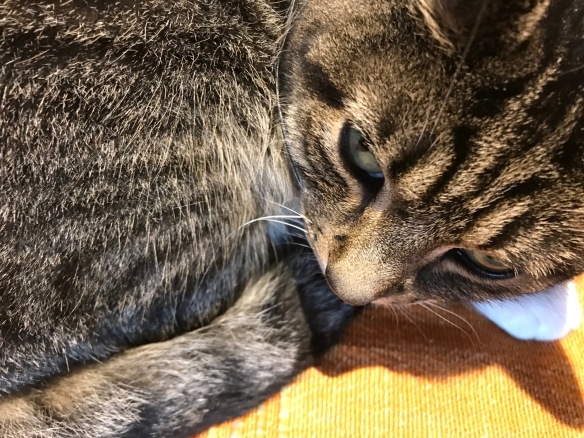 Irrelevant photo: This is Fast Eddie, Senior Cat of the Houeshold, who did not consent to bringing in a kitten and is not amused.

Vinegar and other acids

You could clean windows with white vinegar and rub them with newspaper. You could get burned food out of pans by soaking it in cider vinegar and boiling water. (I expect any vinegar would’ve worked, but I’m parroting what I read.)

You could also, bizarrely, get a stain out of an enamel pan by putting a stick of rhubarb and water in it and simmering it for ten minutes, then leaving it to cool for an hour or so.

You could crush eggshells, mix them with lemon, and use them to scour pans.

You could also clean your windows with weak tea that you’d left sitting around for a few days. (I have no idea why the sitting around mattered. Sorry. You’re on your own there.) You could also sprinkle the rug with tea leaves that you’d squeezed almost dry, then take it outside and beat the hell out of it. The tea leaves, according to one source, helped get rid of the smell of tobacco smoke.

Yes, of course anyone who smoked did it indoors back then.

You could also sprinkle an ordinary hard floor with tea leaves before you swept it. The theory was that it would “lay the dust.”

What would you do when you needed a heavy-duty degreaser for carpets and woolens? Well, you’d use stale urine–and yes, it does actually matter that it’s stale. It has ammonia, which neutralizes dirt and grease, which are slightly acidic.

I asked Lord Google for more information on that and his top offering read, “Shop stale urine as a degreaser.”

I didn’t bother. I can make my own and it’s free.

But let’s not stop there. The Victorians had more fun ways to clean  Got bed bugs? Mix four egg whites with an ounce of quicksilver–that’s mercury and it’s extremely fucking poisonous–and brush it onto the mattress. It’s as damaging to humans as it is to bed bugs, but we tend to be larger so it takes longer. The World Health Organization says:

“Neurological and behavioural disorders may be observed after inhalation, ingestion or dermal exposure of different mercury compounds. Symptoms include tremors, insomnia, memory loss, neuromuscular effects, headaches and cognitive and motor dysfunction. Mild, subclinical signs of central nervous system toxicity can be seen in workers exposed to an elemental mercury level in the air of 20 μg/m3 or more for several years. Kidney effects have been reported, ranging from increased protein in the urine to kidney failure.”

You prefer the bed bugs? It’s your choice. The bites do itch.

I can’t give you a solid date for the point when indoor plumbing was introduced–it’s not that simple–but it’s safe to say that almost no one had it. So unless you were wildly rich, you wouldn’t use any more water than you had to. In Ironbridge, Shropshire, some people had to walk a third of a mile for water–and then haul it back, preferably without spilling it.

As the Victorian era rolled on, people further down the economic scale were able to afford some soft furnishings, some books, some knicknacks–little non-useful things that could be set on a shelf and admired. And they all of them collected dust.

So you dusted. Feather dusters were best–they were made from ostrich feathers, which had barbs that caught the dust–but they were also too expensive for ordinary households. So you might use a soft cloth.

You could also squidge white bread into any crevices that you couldn’t reach with a cloth or a fingernail.

I’m shifting categories here, from things people used to clean to the things they cleaned with them. Somewhere out there lurks a way to avoid that, but I can’t be bothered to hunt it. It’s a sly old beast, and I’m simply an old one. So pretend you don’t notice.

In working class homes, the floor would be a hard surface–tile, wood, stone–and you’d sprinkle it with tea leaves, sweep it, then get down on your hands and knees and scrub the beast, using soapy water or water and soda–but this isn’t baking soda, it’s something both stronger and harder on the hands.

Let’s take Ironbridge as an example, because its museums have a good website. It was at the heart of the industrial revolution, a town full of factories, furnaces, and dirt, soot, and smoke (they went together). People heated with coal, which kicked out some more soot. So everyday cleaning was a battle. And the streets–at least in working class neighborhoods–weren’t paved, so when you came in your shoes would be muddy.

This is Britain, remember.

One Ironbridge resident said, “I’ve seen my mother scrub ours twice a day, year in, year out sort of thing.  Because she used to do it in the morning.  Well then we used to come home from school, we used to be pittering and pattering, in and out, because there was no tarmac roads, you carried a lot of rubbish on your shoes.  And I’ve seen my mother set to and scrub the floor before my father come home from work.  And that was twice a day, and that was regular.”

This was one of the heaviest jobs and not technically housecleaning but if you were a housewife (and having gone through what housekeeping was about I begin to think women did marry the house) it was part of the deal.

First you’d collect your water (wherever it was–up to a third of a mile away, remember) and heat it on the stove, then add some soap flakes and toss in your first load of laundry, which you’d agitate by hand, using something called a dolly or a posser. (These days, you can buy a dolly tub online for £170 and use it as a lawn ornament. It’s good to know that irony isn’t dead.)

You’d do that for, oh, say, half an hour. Then you’d run everything between the rollers of a mangle to force the soapy water out and put the laundry into fresh water to rinse.

Then you’d run it through the mangle again and rinse it again. And again. Then you’d add some blue dye to make everything look brighter.

Then you’d run it through the mangle one last time and hang it out to dry, hoping to hell it wasn’t raining. If it was (this is Britain, remember), you’d have to hang it indoors.

When everything was dry, you had to iron it, using a flat iron that you heated on the kitchen stove.

If you wonder why mothers yelled at their kids about getting their clothes dirty, that’s why.

But everyday cleaning wasn’t enough. You had to do spring cleaning as well.

You’d start, I expect, by getting the chimneys cleaned, because that knocked dirt from the chimney into the house. You wouldn’t want to do that after you’d cleaned, and you would want to skip  this step. You could burn the house down.

After that, you’d get to work.

According to the Ironbridge Gorge Museums website, you’d start this at the top of the house and work down, moving all the furniture out of a room, taking the curtains down to wash, repainting the walls or cleaning the wallpaper, cleaning the floors and woodwork, cleaning and polishing the furniture.

This applies, of course, to people whose houses had multiple stories and multiple rooms, and all the stuff that went into them. Adapt it according to your circumstances.

You’d take your carpets outside and whack the hell out of them. Lighting fixtures? These would’ve been gas, oil, or candles and all involved open flames, which brought the gift of dirt as well as light. The fumes from oil lighting tarnished metal. Candles smoked. So clean all your lighting fixtures.

Be sure to polish all the wooden furniture. If you iron your polishing cloth, it will leave a better shine than an unironed one.

Have I missed anything? Take that out and clean it too.

Move everything back in and start on the next room.

What works and what doesn’t?

English Heritage–an organization that maintains historic buildings for the public to troop through and gawk at and charms money out of their pockets in the process–has been trying out Victorian cleaning methods. Here’s what they can tell us.

If they tried stale urine on anything, they haven’t mentioned it.

A final word on Victorian cleaning

It seems only right to leave you with an abbreviated part of the lyrics to a traditional song, “The Housewife’s Lament.” Apologies for the formatting. I haven’t figured out how to set it as a poem.

One day I was walking, I heard a complaining

And saw an old woman the picture of gloom

She gazed at the mud on her doorstep (’twas raining)

And this was her song as she wielded her broom

Oh, life is a toil and love is a trouble

Beauty will fade and riches will flee

Pleasures they dwindle and prices they double

And nothing is as I would wish it to be

In March it is mud, it is slush in December

The midsummer breezes are loaded with dust

In fall the leaves litter, in muddy September

The wall paper rots and the candlesticks rust

With grease and with grime from corner to center

Forever at war and forever alert

No rest for a day lest the enemy enter

I spend my whole life in struggle with dirt.

You can listen to it here.