If you’re even vaguely awake (or as our former and once again active home secretary would say, if you’re a Guardian-reading, tofu-eating wokeanista), then you’ll know that Covid has some new variants, and that they have good publicity agents. So how much sleep exactly should you lose?

Not as much as some of the nightmare-on-Covid-Street headlines would have you think.

Let’s sort the variants into separate piles and talk about them. 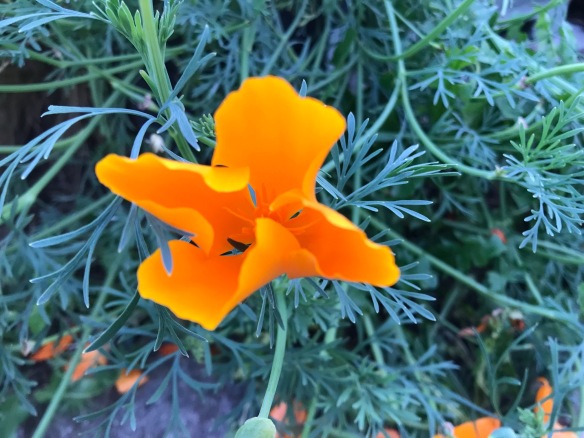 Irrelevant photo: A California poppy. Or since it’s growing in Cornwall and is at least four generations in, maybe by now it’s a Cornish poppy. (That’s a bit of an in joke and I’ll explain it if anyone’s interested.)

BA.2.75 begat BA.2.75.2, because viruses are good at begatting, even if they’re useless at naming their begotten, and since they work under pressure from both our immune systems and the vaccines that are loose in the world, the descendants that survive tend to be the ones that spread most easily or have some sort of hyped up immunity–and .2 does indeed have some of that.

According to Ben Murrell of the Karolinksa Institutet (that’s not a typo; it’s Swedish), “While antibody immunity is not completely gone, BA.2.75.2 exhibited far more dramatic resistance than variants we’ve previously studied. “

In layperson’s terms, that means, “Well, damn.” It also means some of the antiviral treatments given to people who’ve been hit the hardest won’t work against this one, but all is not lost because one still does.

That was what passes for good news. (Don’t go away–there’s more good news later on.) On the other side of the balance, the antibodies running around in the blood of anyone with antibodies (that’d be people who’ve been vaccinated or who’ve had Covid) are only about a sixth as effective.

Still, a sixth means they’re not completely ineffective. This is good, but it’s not the good news I was waving signs about. For that, you have to wait. Or skip ahead.

What’s not known yet is how quickly the variant will spread. It’s in several countries but can claim only a minority of cases, so it may not become dominant. It’s also not known whether it’ll drive up hospitalization rates or how protective the vaccines will be against it

Balancing all that out, I’d say it’s not time to panic yet. If you’ll wait a bit, you can always panic later.

BQ.1 and BQ.1.1 are not to be mistaken for either meat cooked with a sticky sauce–that’s BBQ–or B&Q, which is a chain of British stores that claims to have everything you need for your home and garden. What my home needs is a good coat of paint, and they do have paint supplies, but the problem is getting the paint and the walls in the right relationship to each other. The last time I tried, the dog and the rug somehow got into the relationship and–

Anyway, no, they don’t really have everything I need.

The BQ variants are making headlines and US influencers are running around saying they’re worse than the CDC is admitting.

The CDC is the Centers for Disease Control, which technically speaking should get a plural, but never mind. What matters is that if the CDC had said they were world-ending, somebody would jump up and say the CDC was trying to panic us all for dastardly reasons of their own. You can’t win this game.

The BQs were begat by BA.5 and last I looked (that was Octover 23) made up 11% of Covid cases in the US. Like BA.2.75.2, they’re pretty good at dodging the neutralizing antibodies we’ve spent so much time and effort developing.

By the beginning of 2023, the BQs are expected to make of 80% of Covid cases. I think that means the world’s Covid cases, but they could be talking about Europe’s. Let’s not split hairs. They spread, probably because of the way they dodge our antibodies. There’s no evidence so far that they’re more severe than the earlier versions or that they’ve completely sidelined the vaccines.

Finally, we have the XBB variant, which instead of being begotten combines two earlier variants. I’m not going to try to explain that–let’s just say viruses have many ways to mutate–and you don’t really care which variants they were, do you?

XBB is already creating subvariants. You know, XBB.1 and all that mess. By October 20, it had popped up in 26 countries and was collecting headlines calling it a nightmare variant. It seems to spread rapidly and it too knows how to slip past our neutralizing antibodies–even more so than the new BQ and BA variants. The last of the monoclonal antibodies–the one that works on the B and BQ variants–doesn’t work here.

It’s not clear yet whether it causes a more severe form of Covid, but in Singapore, where it’s spread widely and which has a 79% vaccination-and-booster rate and  strict control measures in place, it’s been milder. “The number of people dying or in the ICU is really low,” according to Eric Topol of Scripps Research. “Their protection level is really solid.”

What kind of strict measures?

“Facemasks remain compulsory on public transport and in most healthcare facilities. Contact tracing requirements remain in effect for events with more than 500 people. Authorities continue to bar unvaccinated people from dine-in services.” People who test positive are quarantined at home.

There’s no evidence XBB and its kiddies make anybody sicker than the earlier variants, and it’s too early to tell how well the new booster shots will work against it, but educated guesses say they’re still be well worth having.

“We’re going to have another wave,” Topol said. “The question is, how bad is it going to be?”

Can’t remember who Topol is? He’s up a few paragraphs.

On the other hand

Should we all just go out and slit our wrists?

No. It’s messy, it causes pain, and it’s not necessary. The new variants are a problem, but–and it’s a big but (with one T, thank you very much)–neutralizing antibodies aren’t the only insult in our immune systems’ vocabulary. We focus on them because they’re easy to measure, but our immune systems know other ways to get under Covid’s skin–or maybe that’s its spike protein. Or–

You know what? Never mind. Failed metaphor. Move on. Nothing to see here.

Our immune systems have T cells. And B cells. And if they’re English speakers, they’ve still got 24 letters in the alphabet once they use those up. What’s more, people who’ve had Covid have some letterless (as far as I know) immune cells throwing parties in their lungs.

The phrase Immune escape (which I’ve avoided using but which serious people will) has been misinterpreted. It sounds like it means time to panic. It doesn’t.

Especially since multiple articles are telling us about research groups edging closer to a universal (or near-universal–I’ll settle for that) coronavirus vaccine which would, at long last, put an end to this damn pandemic. So put the knife back in the drawer. We can do without the drama, thanks.