England’s in three separate stages of Covid restrictions right now, with the stage depending on where you live and how high the local infection rate is, but weeks ago the government’s official scientific advisory group urged it to impose a short, tight lockdown to stop the rise in infections. To which the government said, “What do you know? We’re following the science.”

“Not the scientists,” the government said. “The science.”

It’s not clear at the moment exactly what science they’re following. I’ve been wondering if they got hold of one of those “The Science of. . . ” books. You know: The Science of Getting Rich, The Science of Storytelling. Or if they have science confused with Scientology. 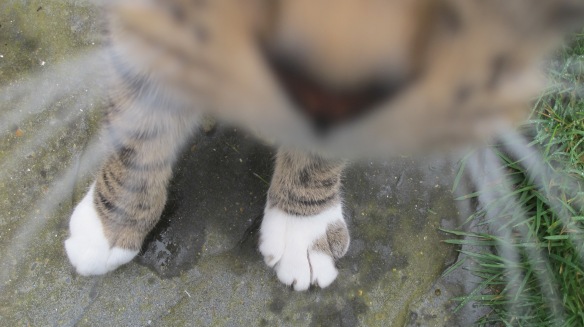 Entirely relevant photo (if you read to the end), which won’t play well on social media: This is Fast Eddie thinking deeply.

In the meantime, though, everyone’s mad at everyone. Local governments in the areas with tighter restrictions are furious that they’ve been allowed no power (never mind funding or serious consultation) to deal with their local situations. People whose workplaces will be shuttered are mad that they’ll be paid a smaller percentage of what they’d have earned than they were paid during the national lockdown. Disregarded parts of the country are feeling more disregarded than usual. They tend to be the places where the infection rate’s high, because transmission’s highest among low-income groups and minority ethnic groups, which aren’t groups that get a lot of help from governments in general but that get even less when the Conservative are in power. So they’re mad. Parts of the Conservative Party are mad because they don’t want the government closing things. The Labour Party’s mad because it’s sure it could handle the pandemic better than the Conservatives–and to be fair, it would be hard work not to. And I’m not particularly happy because I’m buried in newspaper clippings.

Yes, I work from actual paper, at least to start with. Some days, all you can see of me is a tuft of white hair and a pile of newspaper.

Send tea. The dogs will know how to find me.

It’s not just local governments who are feeling slighted. MPs from hard-hit areas are finding out about government plans for their areas via What’sApp or being given twenty minutes notice of briefings. One, from Wigan, claimed she was left out of a briefing because the ministers in charge didn’t know where Wigan is. To make up for that, another was invited to a briefing for an area her constituency isn’t part of.

A third heard about a twenty-minute briefing eight minutes after it had started.

You know those face shields that are (presumably) more comfortable than masks? It turns out that they’re the next best thing to useless. Almost all those lovely, airborne droplets and aerosols that the wearers breathe out escape through the gaps. But you’ve got to admit they make a person look like they’re serious about not spreading the disease.

In September, while England was learning to count all the way to six in order to figure out who it was safe to get together with outside of a work or educational setting, a stag hunt not only got 130 people together, almost all without masks, the outfit putting it on also got a £10,000 government grant and a £50,000 loan from pandemic-related programs.

Grouse hunts are also exempt from the six-person get-together limit. But if you want to get together and grouse about how inconsistent the rules are, the limit’s still six.

People (predictable creatures that we are) increased their use of social media during lockdown, and it turns out that people who send more pictures on social media are at greater risk of depression. Or so says an admittedly small study involving 170 participants, an online questionnaire, and absolutely no photos of anyone standing on a beach looking 30 pounds thinner and 10 years younger than their actual weight and age.

Does that mean photo-sharers are depressed (or at risk of . . . ) because they send photos or do they send photos because they’re depressed or at risk of? We don’t know. Or I don’t, and the report I saw doesn’t say. All I know for sure is that one fact one lines up with the other one. So can we be safe, please, just in case sharing photos does cause depression. Tell the cat he can stop doing that thing with the lettuce and the chisel because you’ve put the camera down and you’re going to face an entire day without clicking the imitation shutter even once. Even if he starts playing the banjo, you’re not picking it up. Not today.

Yes, bare-assed reality’s tough, but it’s out there anyway. Might as well see what it looks like.

In an earlier post (and if you think I know how much earlier, you don’t understand how things work around here), I mentioned a Covid bailout program for small businesses that the British government set up so loosely that it screamed “Scam me!” and people obligingly did. Well, for the sake of balance, it set up another one to be so complex that only one company got all the way through the process.

The idea behind Project Birch was that big companies would get emergency finance and in exchange give the government a stake in the company. Ten companies were interested but found the process so complicated that they walked away.

The U.N. secretary-general, Antonio Guterres, said that the pandemic has shown us that the world needs universal health care if it’s going to deal with the next pandemic.

By not responding adequately to this one, we’ve let the pandemic cause more than a million deaths, infect more than 30 million people in 190 countries, wipe out 500 million jobs, and cost the global economy $375 billion a month.

The standard indicators of human advancement and well-being are going in reverse for the first time since the U.N. started measuring them in 1990.

It’s not news that the pandemic’s put a strain on health systems everywhere and that both non-urgent and damn urgent treatments have been postponed. But how is NHS England (NHS being the National Health Service) planning to respond? It plans to fine NHS trusts (that means hospitals, or at least the organizations that run them) that haven’t gotten back to near-normal schedules by the end of the month. Because what could possibly make more sense than taking money away from an overstretched system when it shows signs of being overstretched?

Johnson & Johnson’s vaccine trial has gone on hold while they frantically try to figure out why one of the participants got ill. That’s roughly all the information that’s available, although any decent reporter can fill several paragraphs with it. I’m not a reporter, so all you get is two sentences.

The following is a note from that deepest of thinkers, Fast Eddie the cat. He doesn’t usually communicate with strangers, and since he’s broken his silence I believe we should pay attention:

Please, people, give it some thought.