In the Middle Ages, English fairs and markets had a fast-acting justice system called–well, what it was called sort of depends on how you want to spell it, and then your best guess about how to pronounce it. This is English, remember. Pronunciation and spelling aren’t often on speaking terms, and in the Middle Ages spelling was still a liquid–years away from taking on a fixed form.

The spellings I ran into most often were pie poudre and piepowder, but the West Sussex Records Office adds “pyepowder, pipoulder, pepowder, and pipoudre,” and notes (gleefully) that the spelling sometimes changed within the same document. How do you pronounce it, then? I consulted Lord Google, as I so often do, using the pie poudre spelling, and he led me to a website that asked if the phrase was Catalan, Mandarin, or Australian English. It didn’t matter what I chose, though, because it couldn’t actually hack up a pronunciation in any of them, but that was fine since by then I’d pretty well lost my trust in it.

YouTube, however, looked me right in the eye and swore the correct pronunciation is pie powder. I have no reason to think YouTube knows what it’s talking about, but let’s go with it anyway. It’s hard to remember a set of letters unless your brain can tack a pronunciation onto them. Or that’s how my brain works, anyway. When it works at all.

However you pronounce and spell it, though, we’re not talking about an instant pie mix. The name came from the French for dusty feet, pieds poudrés, or so Lord Google, in the authoritative person of the Encyclopedia Britannica (with a little help from the West Sussex Records Office), assures me.

We’ll come back to that and I promise it’ll almost make sense, 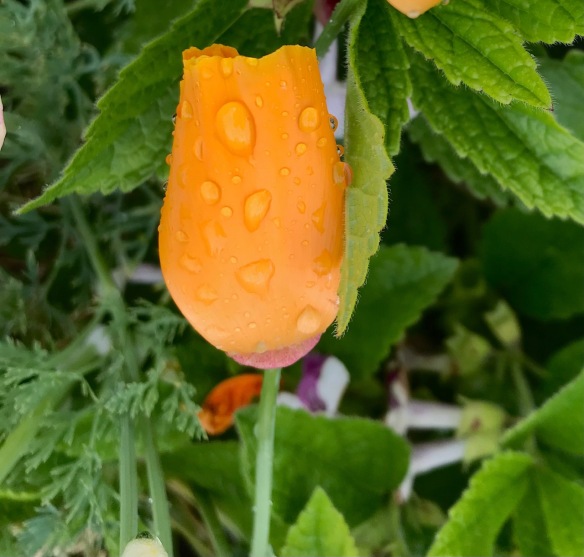 Irrelevant photo: a California poppy after the rain.

What was the piepowder court?

It was the lowest level of common-law justice in medieval England. As the Britannica puts it, it was constituted by merchants. It then defines constituted in several different ways, leaving me to wonder if it was made up of merchants or if merchants organized it or if they actually established it.

Screw it. It existed. Merchants were involved. Let’s move on.

The court dealt with problems that came up at markets or fairs–and medieval fairs, remember, were places where business got done. So they heard arguments about who cheated who, who stole whose spot, and who was a disorderly nuisance.

The piepowder court would meet for as long as the market or fair lasted, and people could drag each other into court to be judged on the spot by the merchants in charge. With the dust of the market still on their feet.

You get a sense of medieval snobbery from that, don’t you? Dusty feet? The horror!

Let’s go back to West Sussex for its take on dusty feet:

“What this is referring to is most likely the people who travelled to towns from far and wide for market days–travellers and vagabonds. Within modern French, pieds-poudreux is supposedly used for travelling beggars. Another given reason is how it relates to the speedy justice that was administered. Or perhaps another origin comes from how members of the piepowder courts were constantly walking around the markets, the dust coating their feet as they moved.  It’s possible the term references them, rather than the travellers and merchants. In my mind the first is the most obvious answer, but it is likely the true answer is a combination of all three.”

An alternative explanation is that justice was done as speedily as dust can fall from a person’s foot. We’ll probably never know, so take your pick.

How did they work?

Once someone accused someone else of whatever, the court had to make its decision within a day and a half. Markets and fairs attracted people from outside their areas, and they couldn’t hang around, waiting for the court to get around to them.

The piepowder court in Bristol, at least, had three or four judges, and it was up to the accusers to prove their cases. Then the defendants could argue their innocence and present their evidence. This was unusual in medieval courts. They generally relied on oaths. People would bring in a set number of their equals who’d swear they believed the oath.

Piepowder courts could punish a person with a fine or the pillory, and if they didn’t pay up the court could seize their goods.

West Sussex still has a record of how to open the court at the Chichester Sloe Fair.

“Let the Cryer make Proclamation on the South Side of the High Cross as follows – at 8 o’clock:

“Oyez – All manner of Persons that have to do or intend to have to do At the Ancient Pavillion Court of the Right Rev. Father in God Sir Wm Ashburnham Bart. Lord Bishop of Chichr holden on this Day [at the Gate commonly called the Canon Gate] for this City and the Liberties there of with the Fair called the Sloe Fair, for the time and space of Eight days beginning this Day being the Eve or Vigil of the Feast of St Faith the Virgin come forth and give your attendance. God save the King.”

For that, the town crier got a cut of the court’s income.

Yes, of course the court made money. Even if justice is supposed to be blind–and I doubt the phrase wandered into the language this early–it sure as hell doesn’t do its work for nothing. And fairs and markets were all about making money. The Sloe Fair’s income went to the Bishop of Chichester.

A sloe? It’s the fruit of the blackthorn and grows wild or in hedgerows, although History Extra reminds us that hedgerows didn’t really proliferate until the 16th and 17th centuries, with the full blast of the enclosure movement. It looks like an oversized blueberry but I doubt you’d wouldn’t want to pop it in your mouth without cooking it–and sweetening it if you can. Ask Lord G. about recipes and he’ll tell you about sloe gin, about jelly, and about cooking it with meat. Mostly, though, it’s about the gin these days.

The end of the piepowder courts

The Chichester court last sat in 1834.

Bristol’s piepowder court was active until 1870 and  Hemel Hempstead’s last sat in 1898. The Courts Act 1971 formally abolished them, which by then was just a formality, and as far as I can figure out without taking on more research, the Administration of Justice Act 1977 did the same thing all over again.

The Bristol court, by the way, prefers to call itself the Court of Pie Poudre, thanks.