The Americas are moving away from Africa and Europe at the heart-stopping speed of four centimeters a year. If you plan to row the Atlantic, do it now. Your trip’s only going to get longer.

I couldn’t find any parallel mention of either the Pacific or some continents getting smaller, but systems have only so much give in them, and what’s gained in one place has to show up as a loss somewhere else. What I’m saying is that if that old pair of jeans suddenly fits again, the credit may not go to your new diet, it’s more likely to go to the Atlantic Ocean.

You’ve probably seen this already (and if you haven’t, you may be the only person on the planet keeping that category open), but that’s not going to stop me from telling you about it: A lawyer in Texas appeared in court, via Zoom, to to argue a case while disguised as a cat.

Actually, a kitten. If you play the video–and if you haven’t, you really should–you can see his little kitten mouth explaining to the judge, as we all have to at some point in our lives, that he’s not a cat.

“I can see that,” the judge said soberly, although what he was seeing was that the lawyer was in fact a cat. Which proves that witnesses are expected to tell the truth but judges don’t have to. And that we can’t always believe the evidence of our own lyin’ eyes.

Also that the English language uses the word see loosely. 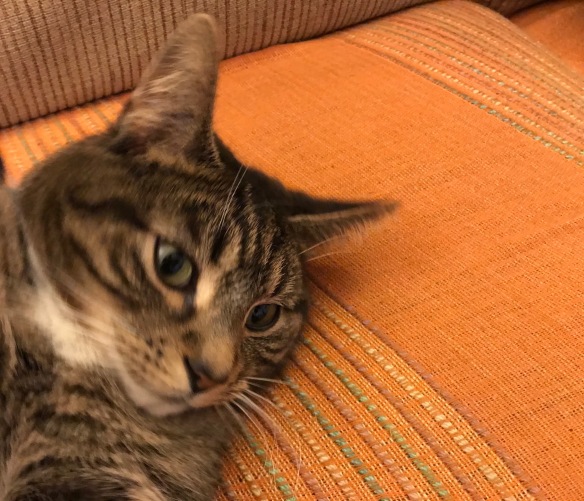 A rare relevant photo: This is Fast Eddie. He is a cat–on Zoom, off Zoom, in any and all situations. He is also, it’s worth noting, not a lawyer. But he is slightly out of focus. It’s not his fault.

I don’t know if any of this will give the defendant grounds to appeal, but some inventive lawyer could have a wonderful time with it.

The lawyer’s not the only person who’s been trapped by Zoom filters since the pandemic forced many odd things to go online. Lizet Ocampo, the political director of People for the American Way, appeared at a work meeting as a potato and couldn’t un-potato herself.

“As a progressive organization, we fight for justice for all and access to opportunities, and in the last three-plus years, it’s been a little tough,” she said (irrelevantly) after one someone in the meeting took a screenshot and put it on social media. “I just kind of gave up and stayed as a potato for the rest of the call.”

What makes her comment relevant is that an organization that fights for justice should recognize the importance of its directors understanding–at first hand if possible–how hard it is for potatoes to get taken seriously. Ocampo, I trust, now has a visceral understanding of the problem.

Congressman Emmer, from Minnesota, appeared at a Congressional hearing upside down, with his head disconnected from any recognizable body part, pretty much stopping any sort of sensible discussion. Contributions included, “Is this a metaphor?” “At least you’re not a cat,” and “You could stand on your head.”

Which brings us neatly to our next topic: Scientists have engineered spinach plants to send emails.

What, you ask, does a spinach plant have to say and why would it want to say it to us, not to another spinach plant? Well, at the moment, the plant doesn’t get to choose. The email will say that the plant found nitroaromatics in the groundwater and the email will go to the scientists.

Nitroaromatics in groundwater are a sign that explosives might be nearby, and their presence triggers the plant to send a signal, which an infrared camera picks up. Then the camera sends the email.

Think of the camera as the spinach plant’s office assistant.

We’ve reached a point where no one thinks it’s strange that a camera sends an email, right? Or that your toaster has opinions about your Facebook posts?

What this means, sadly, is that no one wants the spinach plant’s opinion, it’s just a conduit for information that scientists want.

“Plants are very good analytical chemists,” said Professor Michael Strano, who led the research. “They have an extensive root network in the soil, are constantly sampling groundwater, and have a way to self-power the transport of that water up into the leaves.”

They could, potentially, be set up to send emails related to climate change.

When I walked past my spinach plants yesterday, I heard them whisper, “We feel so used.”

I gave them Ocampo’s email address.

I don’t know why anyone should believe me on this next item, since I can’t prove it by embedding a link. I’m taking my information from a Twitter ad, which if the culprits have any sense will have been taken down by now, but the makers of Weetabix teamed up with Heinz Corp. and advertised–

Okay, you know how British foodies are trying to rehabilitate the reputation of British food? No? Never mind. They are. And it’s important to them, so the rest of us can just play nice, please, and not do what Weetabix and Heinz have done, which was a very unpleasant playground trick involving dry Weetabix and baked beans. Or more specifically, Weetabix with baked beans poured over them. And offered to the world as something to eat.

What is or are Weetabix? Allegedly, a breakfast cereal, although I have tried the stuff and wasn’t convinced. It (I ate less than one, so let’s commit ourselves to the singular) is wheatish and shaped like a raft with rounded corners. Or like a dish sponge. Dry, it tastes like straw. Wet, it tastes like bread that you soaked overnight in lukewarm water.

Yes, I know: Someone out there loves it/them. Possibly even you. And I respect that, although you’re making a terrible mistake, possibly even wasting the part of your life that you spend eating breakfast. But hey, who am I to judge?

Someone with a blog and no editor to keep me from writing myself over a cliff edge, that’s who.

But if I go so far as to admit that I could be wrong about Weetabix (and I’m fairly sure I haven’t), I think even people who like Weetabix, or who at least respect them, will admit that pairing them up with baked beans is one of those errors in judgement that comes from being in lockdown too long.

If you’re good with technology, you might be able to find the ad and turn it into a Zoom filter, then appear at your next job interview as baked beans on Weetabix. The way the job market is these days, how good were your chances anyway?

The History of Parliament blog called my attention to a new electronic tool that lets researchers (along with any fool who stumbles in after them) search parliamentary debates and find out how many times a word like, say, Brexit shows up. So someone’s used it to search for all mentions of the word cucumber.

Come on, someone had to do it. Let’s be glad they just went ahead and got it over with.

The news–and I know this will surprise you–is that it doesn’t come up often. Even in a debate about the Tomatoes and Cucumbers Marketing Board in 1950.

No, I can’t make this stuff up. I’m too earthbound.

I may be misreading this, but the introductory paragraph seems to say that the word’s never been used but later on the post produces an example of when it was used: in December 4, 1656, right in the midst of Oliver Cromwell’s protectorate. We don’t think of that as a particularly funny time, but during a debate about the rights and privileges of the burghs (don’t ask, because what’s important here is the cucumber), the discussion got increasingly convoluted and MP Philip Jones compared it “to the dressing of a cucumber. First pare, and order, and dress it, and throw it out of the window.”

Reword that and you’d get a laugh. It’s all in the delivery.

A four-year-old walking the beach with her parents spotted a dinosaur footprint. It’s 220 million years old and was preserved in the mud. No one’s sure what kind of dinosaur left it but it would’ve been small and walked on two legs.

It was on a beach called the Bendricks, in Wales, which the South Wales group of the Geologists’ Association called “the best site in Britain for dinosaur tracks of the Triassic Period.