At some point during the pandemic, the good folks who comb through Covid tests noticed that a certain number of people who’d recovered from Covid kept testing positive, although further testing couldn’t find any live virus in their systems. Now a study offers us a theory about why that might be happening.

Ready? In simplified form, since that’s as much of it as I can handle, bits of Covid’s genetic sequence can embed themselves in human DNA, getting there by a process called reverse transcription. Don’t worry about what it’s called, though. I only mention it so it’ll have a name and we can call it when lunch is ready. 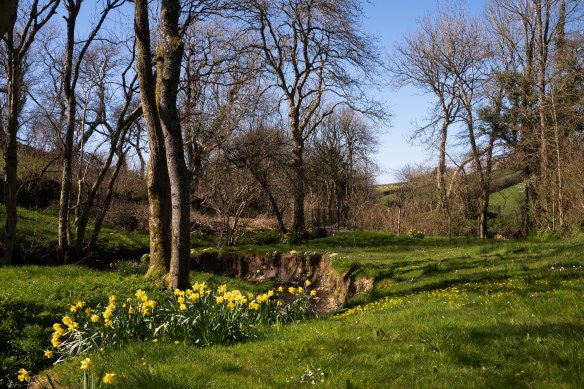 Irrelevant photo: Daffodils by a stream. Photo by Ida Swearingen.

Before you come unglued about the idea of Covid embedding itself in your DNA, understand that it doesn’t mean Bill Gates is embedding himself so he can send you instructions to buy his latest product or divorce your–or his–wife. Something like 8% of our DNA is made up of sequence fragments left there by ancient viruses. That sounds eek-ish, but they do nothing more than sit around looking ancient. And if you know how to read them, interesting. They’re not responsible for diseases or divorces or anything else beginning with D.

Now if they were retroviruses, they’d use a position in our DNA to replicate and make us sick, but Covid isn’t caused by a retrovirus, so if it’s there, it’s doing nothing.

Take a deep breath. The situation isn’t any worse than it was a minute ago.

From there on everything gets complicated, but I did escape away with this much information: 1, It’s not yet clear how common reverse transcription is with Covid; 2, if it’s happening at all, it might mean that some Covid immunity gets integrated at the cellular level (that would cause a good thing); and 3, it might also be responsible for the autoimmune responses that show up in long Covid (that would cause a bad one).

Warning: The study’s still controversial, with some scientists yelling–in a more academically appropriate way–”This is bullshit and it’s feeding into people’s fears.” Make of it what you will. I suggest tucking a sprig or two into your hat and waiting to see what it’s done in a month or six.

Mmm, well, maybe. There are two problems with the argument. The first and biggest is that evolution’s random, driven by a combination of pure dumb chance and the pressures put on it by outside circumstances. So as any given disease evolves, it could become milder and it could become more deadly. Or could become neither and change in other ways–ones we care about less.

But that’s old news. The second problem with the argument is newer and more interesting. A group of necrophiliacs–

Sorry, a group of scientists studied the bodies of 36 sixteenth-century bubonic plague victims and compared their immune markers with those of people living in the area today. The modern residents showed a greater genetic resistance to the plague than the sixteenth-century bodies did.

“This suggests these markers might have evolved to resist the plague,” said Paul Norman of the Colorado School of Medicine.

Because it’s not only diseases that evolve: So do we. And if the study’s correct, so did we. Or at least so did the people of that particular town.

If you want to get whacked with the full scientific verbiage, the article says, “Among the current inhabitants, the team found evidence that a pathogen, likely Yersinia pestis which causes bubonic plague, prompted changes in the allele distribution for two innate pattern-recognition receptors and four Human Leukocyte Antigen molecules, which help initiate and direct immune response to infection.”

Me neither. That’s why quotation marks were invented.

The good news here is that humanity can adapt to massive medical threats. The bad news is that, even if some of us have genes that will protect us against Covid, we can’t know in advance who’s got ‘em and who doesn’t. And for those genes to spread through the population would take I’m not sure how many generations and many deaths, which would unsentimentally eliminate those of us who don’t have ‘em.

In short, if you can get vaccinated, do.

Does vaccination either stop or slow the spread of Covid?

A study that followed vaccinated and unvaccinated hospital employees found that vaccination dramatically reduces asymptomatic Covid infections. In fact, the change was enough that a pretty dry writeup of the study used the word dramatically. The word didn’t wander into this paragraph because I was struggling to keep us all awake.

So what? So it means that vaccinated people will be dramatically less likely to pass on infections. If you don’t get them, you can’t give them.

How dramatic a change are we talking about? A week after getting their second shot (or jab if you speak British), vaccinated people were 90% less likely than their unvaccinated co-workers to have asymptomatic Covid.

In that case, how soon will the pandemic be over?

A group of infectious disease modelers at Northwestern University are playing with the numbers and trying to figure that out for the U.S. alone. Their projections are lining up nicely with the numbers reported from the real world, so they’re worth listening to. Basically, the number of Covid deaths and the number of severe cases are going down. That’s the vaccination program at work.

Rochelle Walensky, of the Centers for Disease Control, said, “The models forecasted some really good news, and an important reminder. The reality is it all depends on the actions we take now.”

Basically, she says, controlling the pandemic depends on people getting vaccinated–quickly.

Is forecasted a real word? Yup. To forecast has two past tenses, depending on what mood it’s in when it gets out of bed. Forecast is one and forecasted is the other.

You can’t always forecast which mood it’ll be in.

I didn’t know that either.

“The results remind us that we have the path out of this,” she said, “and models once projecting really grim news now offer reasons to be quite hopeful for what the summer may bring.”

But the modelers warn that this doesn’t mean all restrictions should be lifted at once. Surges are still possible, and new variants are a threat.

They don’t specifically mention this, though, so I will: Until vaccines get to the rest of the world, no country is safe.

Which leads me to this: As of May 6, 44% of the US population and 51% of the UK population had been vaccinated. Compare that to 9.4% in India, 4.4% in all of Asia, and below 1% in all of Africa. Which is an elaborate way of saying even the safest of us is a long way from safe.

Appeals to our higher nature are fine, but the desire for self-preservation’s a powerful force and always worth a mention.

Long Covid has a new name: Post-Acute Sequelae of SARS-CoV-2–or PASC to its friends.

Why does it need all that? Because in my experience, when the medical community can’t cure something, they rename it.

Since I’m claiming to have experience, I’d better cite my qualifications. I lost four years of my life to some sort of post-viral exhaustion that was so vaguely defined it had to be diagnosed by picking two symptoms from List A and three from List B. Or maybe it was one and four. Either way, I watched the syndrome go through two or three name changes before I stopped keeping track.

The experience means that I’m more afraid of long Covid than I am of the severe form of the disease, although I won’t argue that we should all feel that way.

I’d like to think the new name’s a sign that long Covid’s being taken seriously, and if the number of articles about it are a measure of seriousness it just might be, but being taken seriously isn’t the same as anyone knowing how to cure it. Or even knowing what causes it.

Long Covid lands on people who had severe Covid and on people who had nothing more than a mild case. And this next bit is news to me: It also shows up in people who had asymptomatic cases. It can range from mild to debilitating to horrific. In one study, less than a third of people with long Covid had fully recovered five months after they left the hospital, although that’s a skewed study because it only follows people who were hospitalized.

A different study found that nearly half the people hospitalized with Covid felt they hadn’t fully recovered after seven months. Either that study or a different one (forgive me, I get dizzy when I’m around numbers for long) says one person in ten will have Covid symptoms months after recovering from the disease itself.

This is all still new territory. Expect the numbers to be contradictory. No one even has a fixed definition of long Covid, so you’ll find the game being played by different rules in different studies. And the playing field keeps changing size. In fact, some studies are working with cards and others are convinced it involves a ball.

It’s not clear yet who’ll get long Covid. Working-age women are the most likely, but men can get it, old people can get it. Young adults and kids can get it. No one seems to have a demographic Get Out of Long Covid Free card.

An article from Yale University says we are “facing the prospect of a chronic condition without diagnostics or therapeutics. We are facing a post-viral condition of potentially historic proportions and are almost completely in the dark about the underlying mechanism.”

It goes on to talk about lives that are changed overnight, about long Covid’s disproportionate impact on minority communities, and “a health care system that can offer no substantive assistance.” Not to mention long Covid’s “financial toxicity”–and since the article comes from the U.S., people’s loss of health insurance.

Yeah. It scares the hell out of me.