It’s time to dip into the search engine questions that lead unsuspecting souls to Notes from the U.K. and see what it is they want to know about this green and pleasant land. The questions are in boldface type and I’ve reproduced them in all their oddity. And because my goal in life is to enlighten the ignorant world, I’ve done my best to provide the information they wanted. Even though the people who asked the questions will never wander back to find the answers. It keeps me occupied and mostly out of trouble.

Yes, Britain has good manners. So do other countries, but no one notices because we’ve all been trained since early childhood to think British manners are good manners and other countries’ manners are rude flaming ignorance. We’ve also been trained to think a British accent is classy and other accents need a bath. This is all rampant bullshit, of course, and a hand-me-down from the British empire, but good luck convincing anyone of it. 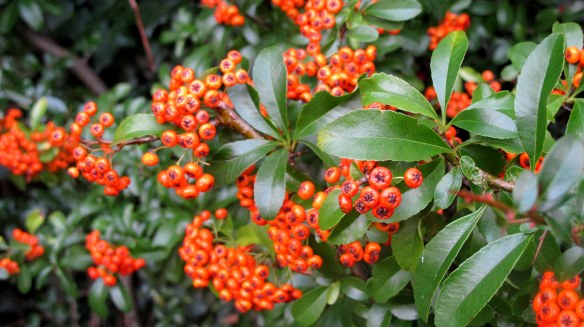 Irrelevant photo: Orange berries. What would you do without me to explain these thing to you?

why do americans say derby instead of ‘darby’

Because that’s how it’s spelled. D e r b y: derby. Americans are naive like that. In spite of all the evidence that points the other way–and, boy, does the English language point the other way–they still think that if a word’s spelled with an E it gets pronounced as if it had an E.

brits think americans are too loud

THEY DO? WHY DIDN’T ANYONE TELL ME?

If you have to look up swear words, they won’t work for  you. Swear words are very particular about who they’ll work for. Stick with the vocabulary you understand. It’ll have more impact.

should word anglophile be capitaluzed?

Capitaluzed? No. Some people capitalize it, though. Others don’t. Because I’m retired (I used to be an editor; now I’m just an everyday fussbudget), I’m not going to chase down definitive sources. You’re probably safest capitalizing it, but you could defend either choice.

Which isn’t much of an argument. People defend all kinds of stupidity. That doesn’t make it right.

should all male mps wear a jacket in the commons

Oh, absolutely. Otherwise British politics would degenerate into the kind of farce where people who support staying in the EU throw all their weight behind leaving because it keeps them in power for another twenty minutes; where people argue against a second referendum in the name of democracy; and where amateurs run the government. Heavens to Betsy, we wouldn’t want that.

stockings in the house of commons

It’s not smart to make guesses about anything as improbable as the British parliament, but I’m about to: I’m fairly sure Christmas stockings don’t play much of a role there. The MPs are too old to believe in Santa Claus, although a few still claim to. On top of which, they go home over the Christmas and New Year’s holidays, so if Santy exists, he has to look for them there.

mps are not allowed to wear armor

This is as shocking as it is true: They are not allowed to wear armor in the House of Commons, and it’s a stain on British democracy.

On the other hand, they (like everyone else in the land) are allowed to wear armor outside the House of Commons. On the train going home, say. At the corner store. It’s heavy, it’s expensive, and they’ll get some odd looks, but I’ve never heard of a law that  prevents it.

If search engine questions are a fair representation of what the world’s interested in, the world is obsessed with brussels sprouts. I could turn Notes into the leading (and only) brussels sprouts blog and make a real success of it. Depending, of course, on how we define success.

Here’s a sampling of the brussels sprouts questions.

why do we eat sprouts at christmas

why do we have sprouts at christmas bbc

Good question, BBC. The world’s waiting to hear from you on this important topic. Why are you leaving it to amateurs like me to fabricate answers? This is the height of irresponsibility.

the tradition of why we eat spr54otes

The truly traditional Christmas dinner doesn’t involve spr54otes, it involves plain sprouts, of the brussels variety. The 54 was added in recent years as people became aware of how important fiber is to a healthy diet. And the U? It still feels bad about Americans having dropped it from so many words and it’s sitting out this round to make a point about how much it has to contribute.

why do cross a sprout

To get to the other side?

No, people. There is a limit. Never put brussels sprouts in your plum pudding.