Britain has a long-standing identity crisis.

Or maybe that’s a recent one. I suppose it depends on how long you consider long. But never mind the numbers. Ever since I moved here, politicians have been fretting over British values—what they are, who doesn’t have them, and how to get immigrants to adopt them.

Speaking as an immigrant, it’s hard to adopt British values when the British are hazy about what they are. Or maybe that’s what they should be. But hey, we do what we can. Or I do, so while the important people are trying to figure it all out, let’s talk about the important stuff, like British food. Because nothing runs deeper into a culture than food. You don’t believe me? Move to another country and see what you miss. 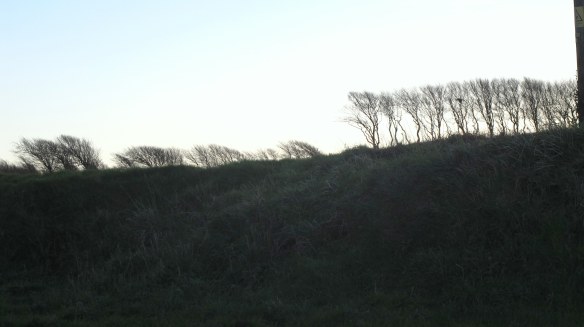 Irrelevant (and less than sharp) photo: Winter trees. I have got to get out there and take some more photos.

Okay, “nothing runs deeper” could be overstating the case. I’m using a time-tested way of making a point here, which is to exaggerate and toss in a bit of bullshit. But who’d notice if I didn’t point it out?

Let’s move on. After reading my post about fish and chips, Derrick J. Knight commented,

“I believe fish and chips has been supplanted by chicken tikka masala. Robin Cook, Foreign Secretary, in 2001 claimed: ‘Chicken tikka masala is now a true British national dish, not only because it is the most popular, but because it is a perfect illustration of the way Britain absorbs and adapts external influences. Chicken tikka is an Indian dish. The masala sauce was added to satisfy the desire of British people to have their meat served in gravy.’”

Cook wasn’t being original in claiming chicken tikka masala as the British national dish. The idea’s so prevalent in the national joke-o-sphere and all a person has to do is reach out and snag a version as it flits past, then claim it as their own.

The ponderous explanation of why it’s so gloriously British, however, I’m willing to credit to Cook alone.

Before Britain voted to leave the European Union, a group of MPs tried to get the dish Protected Designation of Origin recognition from the EU. That would (or would have if the move’s been abandoned) put it on a level with champagne and parmesan–foods whose names are reserved to those products made in the region where they originated.

Their claim was based on a origin story that traces it back to Ahmed Aslam Ali, who is supposed to have invented chicken tikka masala in his Glasgow restaurant.

“We used to make chicken tikka,” he told the Telegraph—or possibly someone else, but it doesn’t matter because the Telegraph quoted him and that’s who I’ll attribute the quote to, “and one day a customer said ‘I’d take some sauce with that, this is a bit dry,’ so we cooked chicken tikka with the sauce which contains yoghurt, cream, spices.”

In other versions of the story, he tossed in a can of Campbell’s tomato soup, some spices, and a bit of yogurt. I was reading happily enough until I got to the can of tomato soup, at which I went into such a deep state of shock that I lost the URL that would’ve proved I didn’t make that up.

Applying for Protected Designation of Origin recognition meant that all hell broke loose. We’re quoting from the Telegraph again.

“Zaeemuddin Ahmad, a chef at Delhi’s Karim Hotel, which was established by the last chef of the last Mughal emperor Bahadur Shah Zafar, said the recipe had been passed down through the generations in his family [presumably without the canned soup, but what do I know?].

“’Chicken tikka masala is an authentic Mughlai recipe prepared by our forefathers, who were royal chefs in the Mughal period. Mughals were avid trekkers and used to spend months altogether in jungles and far off places. They liked roasted form of chickens with spices,’ he said.

“Rahul Verma, Delhi’s most authoritative expert on street food, said he first tasted the dish in 1971 and that its origins were in Punjab. ‘It’s basically a Punjabi dish not more than 40-50 years old and must be an accidental discovery which has had periodical improvisations,’ he said.

“Hemanshu Kumar, the founder of Eating Out in Delhi, a food group which celebrates Delhi’s culinary heritage, ridiculed Glasgow’s claim. ‘Patenting the name chicken tikka masala is out of the question. It has been prepared in India for generations. You can’t patent the name, it’s preposterous,’ he said.”

In another version of the tale, “Chicken tikka masala originated in British India where its spicy precedent was toned down to suit British palates. They also claim that butter chicken was the first protoype of chicken tikka masala. In her book Curry: A Tale of Cooks and Conquerors, Lizzie Collingham takes an excellent look at the history of Indian food. She has an entire chapter dedicated to chicken tikka masala and writes, according to food critics, that it, ‘was not a shining example of British multiculturalism but a demonstration of the British facility for reducing all foreign foods to their most unappetizing and inedible forms.’”

Take that, Robin Cook. And for the record, I have no opinion of my own about how appetizing or unappetizing the stuff is. I’m been a vegetarian for decades now and have never tasted the stuff.

Now, can we talk about what British values are and what it would mean to the country if I do or don’t adopt them? I’ll make us a nice plate of chocolate chip cookies to eat while we talk.