Okay, settle down at the back, because this will be on the test: New Zealand impounded 300 boxes of the British cereal Weetabix because it sounded too much like the New Zealand cereal Weet-Bix.

Everyone involved is roaring and snorting and threatening and complaining, and I’m not going to quote any of them because they’re all saying predictable stuff. Except for the article I linked to in the last paragraph, which says—in the least inflammatory possible way—that the cereal’s being held hostage.

The reason I mention this—remember, I’m supposed to be writing about Britain, not New Zealand—is that it reminds me that Weetabix is central to British culture. And that I haven’t mentioned it till now.

What are—or possibly is—Weetabix? It—or possibly they—are made of whole wheat, malted barley extract, sugar, salt, and vitaminny things (or at least things that sound like vitamins, but what do I know?), which are then flattened into—oh, something that kind of looks like an oblong kitchen scrubby—a brown one.

Or that’s what they—let’s go with they, okay?—look like to me anyway. 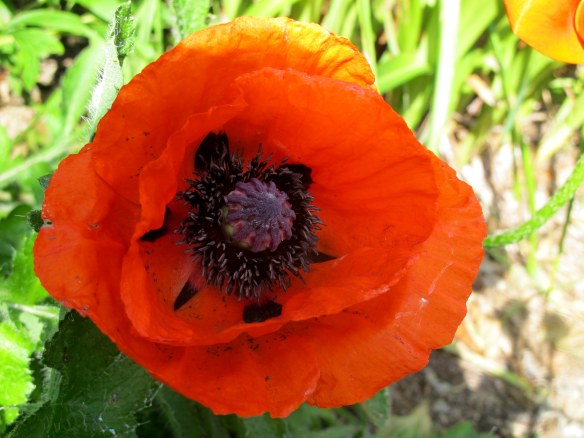 Wild Thing and I tried them once. It wasn’t part of an effort to understand Britain better. We were at our local store (which is also our local post office) and some German tourists had just left after trying to ship an entire carton of the stuff home to themselves. When they found out how much it was going to cost, they took their package off the scales and tossed it in the back of the car instead.

By the time we arrived, the women working there were still going helpless with giggles and saying something along the lines of, “A carton of Weetabix,” as if it was the punchline of some long, delicious joke that was too British for us to ever understand. So we thought we should try them. Maybe we thought they’d taste good, or be good for us. Or maybe we just wanted to understand the joke. It was a long time ago and I’m not sure I understood our motives at the time, never mind in hindsight. What I can report is that on contact with milk Weetabix immediately turn mooshy and inedible. We not only didn’t finish our box, we didn’t finish our bowls. I have no idea what we did with the rest. I don’t like to waste food, but you have to make an exception to some rules.

If they’re so nasty, why do people like them? Well, this is a country that loves mushy peas. And porridge, which is only one step away from wallpaper paste. So people here—people, just to be clear about this, who aren’t us, and to be even clearer, some people here, not all people here—just love them.

A quick browse online led me to The Student Room (“The largest student community in the world”; sorry kids—I’ll be out of here in a minute, and anyway, it’s not a locker room; is everyone decent?), which asked the burning question, “What kind of Weetabix do you eat and how?”

It’s interesting (I’m trying not to say “bizarre”) enough that they asked the question, but even more so that people cared enough to answer it. Which reassures me that young people will still rise to an intellectual challenge if you present them with one.

The answers (before I got bored and left, snapping a towel or two on my way out) include: with lots of sugar; with yogurt and jelly; with warm milk and sugar; with cold milk and sugar; microwaved with milk, sugar, and chocolate; with a spoon; with banana; with banana-flavored milk. With more sugar, and a little more sugar after that. The company website promotes the stuff as low in sugar and it’s good to see the impact that’s had on the nation’s health.

The company also promotes it as a kind of all-purpose crunchy base—something you’d spread with soft cheese and Peter Piper’s picked peppers, or with jam, and then, since you have to do something with it, eat. Or laminate and display on your coffee table. They also have recipes. You can bake muffins and loaves and cakes with the stuff, or crumble it up and bread chicken with it. So basically, you can use it for anything. You’re short of wallpaper paste? Weetabix. Your bike tires need patching? Weetabix. Need a base for your kids’ art projects? Weetabix, Weetabix, Weetabix.

The underlying message seems to be that if you buy it, you can be creative. Open a box and spark up your deadly dull life. Just think—you can choose hot milk or cold; banana or anchovies; pickles or iron filings.

Now let’s be clear. I come from the country that brought the world American cheese, Cheez Whiz, and Cool Whip.

I should explain those for readers who’ve kept their innocence: The first two are cheese that’s been processed into unrecognizability. American cheese looks like suspiciously smooth sliced cheese but it has the texture and taste of nice, soft plastic. When I was a kid, I thought it was great. Cheez Whiz squirts out of a can. Do not give it to kids who are having a party. Cool Whip contains (or so Wikipedia said when I checked) water, hydrogenated vegetable oil, high fructose corn syrup, corn syrup, skimmed milk, light cream, less than 2% sodium caseinate, natural and artificial flavor, xanthan and guar gums, polysorbate 60, sorbitan monostearate, and beta carotene.

No, I don’t know what most of that is either.

If you grew up on real cheese and whipped cream—the kind that recognizably come from dairy products—you’ll be scandalized by all three of them. So I have no right to be snotty about what people in other countries eat. That won’t stop me, but I do want to acknowledge the injustice of it.

The United States also (as far as I can figure out) gave the world the paint-by-the-numbers kit, so the U.S. is no stranger to canned creativity. I was about to say that buying creativity in a cereal box takes us a step beyond that, but then I remembered a series of advertising campaigns implying that creativity consisted of putting something new and exciting on a Ritz cracker. Or maybe it was a Triscuit.

I tell you, I grew up in an exciting world.

So what Weetabix is doing is no worse than that, except that it tastes like moosh and Ritz crackers and Triscuits at least taste like crackers.

Okay, I never tried a dry Weetabix. I’d expect it to taste a lot like hay, but I’m not buying a box just so I can give you a description. I’m going to step aside and trust that someone will step in and tell me—probably that they taste great. If that’s what you hear, take it with a grain of salt, folks. These things are highly subjective.